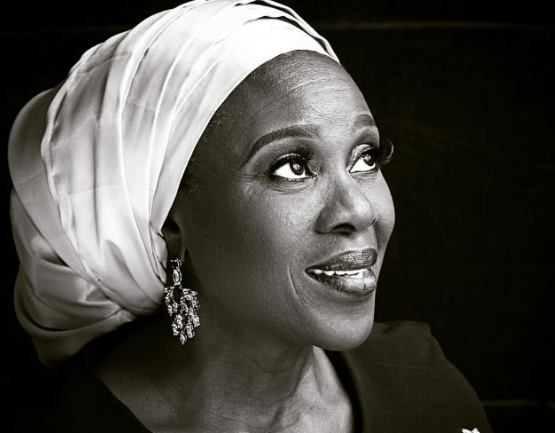 Subtle exuberance, perfect glee and graceful poise make up the combination of obvious attributes the perceptive mind will register after only five minutes in the presence of Joke Silva, an iconic figure several generations grew up idolising.

Actors, they say, are seasonal like rain but Silva has stayed put in our consciousness, on our screens and stages for decades.

To some, she’s the godmother of ‘Nollywood’, a term which the Nigerian film industry has come to be known. To others, she’s that looming, not ominous figure, egging you on, and supplying ceaseless inspiration to carry on in a fickle industry.

Her charisma is such that, in her presence, you’re on your toes yet relaxed enough to be yourself.

Silva sees stage and screen acting as her babies, hence she has no favourite.

“Neither,” she declared when asked to choose between both platforms.

“I like them both equally, the techniques for working on both are different and they are both challenging. So, I like working with the challenges of both,” she said in an interview with TheCable Lifestyle.

EARLY DAYS, HONING A TALENT AND FINDING HER WAY

Many find it hard to settle on a career path but Silva is not one of such persons. She knew what she wanted from the days of her youth and went after it, “with the support of her parents and the consent of the Lord”.

“Acting was something my parents knew I had a talent for, so they encouraged me throughout my schooling. When I got to the crossroads, that was my A levels year, I asked the Lord where he wanted me to be and when he gave the answer, it was entertainment.

“So, I focused on that and when I came back home after my A levels, my late uncle got me attached to the UNILAG culture centre, as it was called then. It later became the department of creative arts.

“There were performances all over Lagos and outside Nigeria, I was with them those good old days and we performed all over.

“That same year, somebody saw my work and said they would like me to come work on television; NTA. So I got involved in radio productions as well, and I got invited to work at the National Theatre.

The successive opportunities and experience weren’t enough for the thespian: she wanted more and sought it.

“I discovered that I still felt as though I was lacking something so I went back to train. For my parents, they wanted me to be sure of what I wanted to do. I had such a wonderful time, I was earning good money so it was a case of ‘well, this is what you are cut out to do’, so it might be a good idea to do and train properly for it.

“So, I went for audition training to get into drama school, otherwise you won’t get in.

After concluding her training, she studied at Web Douglas Academy for over two years before returning to Nigeria to work on ‘Mirror in the sun’, ‘Second Chance’, ‘The king must dance naked’, ‘Violated’, and ‘Owuro lojo’.

She credits good directors like Eniola Fani-Kayode for moulding her for the camera, saying: “I got some good grounding when I came back from my training.”

With all due respect to the parties who have championed the recent debate of old and new Nollywood, Joke Silva is not interested.

The best she can do for the sensitive debate is to remain on the fence of wisdom.

She said: “Let’s put it this way using the argument of old and new Nollywood, the side of the fence that I stand on is that for every industry, new players would come and while they would even be considered as new players is because they are bringing value for their own generation.

“Those that consider themselves as the new Nollywood, give them another 20 years and they are going to become the old Nollywood and that’s the cycle of life. The new players must always add value,” Silva told TheCable Lifestyle.

Although the ever-busy entertainer hardly has time to see movies, she spoke highly of ’76, Surulere and Oloibiri.

“I enjoyed Surulere very much but I felt it was a bit long; it could have been shorter but I enjoyed it. It was just the preview of Oloibiri that I saw; I really want to see it. I also want to see ’76 because that’s an era I am really fascinated about; I look forward to seeing it.”

It’s been a particularly busy year for her, thanks to the success of the popular play ‘Hear Word’. Between then and now, she’s gone “from one production to another” until she got to ‘Heartbeat’, a musical centered on love, hate, betrayal, family, identity, politics, homelessness and social (in)justice.

“We went international with ‘Hear Word’. It was an amazing, eye-opening production. We went to Houston, Harvard, Amsterdam and then we ended up with a tour in Abuja,” she quipped excitedly.

“What was very heart-warming in the international cities was to hear Nigerians who were dotted around the audience, they were not mostly Nigerians; we had mostly Westerners who came. The few black people who came to see the show were first generation Africans. They were so proud.”

2016 would be remembered as when Nollywood movies staked a claim for the global spotlight.

Quite a few films got international attention and new producers, investors, and filmmakers were further encouraged by the receptiveness.

Silva agrees that the performance of some Nigerian movies at film festivals proves that Nollywood is “definitely on the radar,” and added that “it isn’t as though we are just coming on it”.

“There are some incredible films that still need some work but a lot good quality films changed the perception of the country.

“The people are more aware, especially the business sector, of the incredible potential of the industry as a foreign exchange. We have always exported our films but never formally. Now you can see it, it’s been formalised with serious foreign exchange.”

PIRACY: ANNIHILATION OF AN INDUSTRY

Silva’s passion for the fledgling movie industry was unmissable when she spoke about the problem of piracy, stressing that it remains a major factor why filmmakers find it hard to make money.

Although many are embracing digital platforms to make some income from their creation, she believes online is not immune from the scourge of piracy.

Adopting a more serious tone, she tackled the topic like one who has been affected and is still being affected by its ripple effects.

“What the country is facing is a total annihilation of an industry that has the potential of not only being a foreign exchange earner but job creation.

“There is a lot of discussion now about inequality worldwide and the interesting thing about entertainment sector is that the entry level is very easy so it is one of the industries that close the inequality gap.

“Socially and economically, it is an industry that must be protected, and one of the ways to ensure this is that we get rid of piracy. I really don’t even want to hear that we have increased distribution. There are people trying to get proper distribution but they can’t do it with the piracy on ground,” she said.

But it is not a battle for filmmakers to fight alone. The government, she said, has to get involved.

“Of course, it does require the government’s intervention, it requires political action. Government has promised to and we need to see the manifestation,” she added.

IF KANO DOESN’T WANT A FILM VILLAGE, OTHERS DO

Recently, the Muhammadu Buhari administration proposed to build a film village in Kano but it was rejected based on moral and cultural reasons.

Silva opined that the wishes of the people should be respected, noting that the film village can be built elsewhere.

“One has to respect the culture of the people and if the people say they find it culturally not acceptable, it just means there is an opportunity to build it nearby.

“They should take it elsewhere where they want it and people from that side of the country will go to where it is available. If they miss out of the economic opportunity, someone else takes advantage of that economy.”

LEGACY OF AN ICON & EVERLASTING FULFILMENT

Silva, married to a thoroughbred theatre veteran, Olu Jacobs, will be remembered for many things but of utmost importance to her, is for the movie industry to be financially vibrant, taken seriously and greatly valued.

“For me, part of the legacy is already playing itself out because I meet young people who want to go into the industry and take it as a career, not as a hobby. So, now I think one has been part of creating ideas and it is obvious that there is an industry.

For me, it is to see people go into their old age without having to beg for bread, assistance or health care. This is what piracy is also doing to us, the money is not coming in as it should.”

Will she ever stop acting?, TheCable Lifestyle asked. “I doubt it,” said the multi-award winning thespian.

Silva made it clear that she will continue to act, produce, direct and do every other thing that gives her joy till atrophy sets in, and her muscles become too weak to function.

She continued: “Probably when I can’t move, that’s when I would stop and if that happens, I will just say ‘Lord, can I come now?’ so it is to the end.

“I will never forget that I saw Lawrence Olivier who was in his 90s in a film with Madonna who was in her 20s and it was beautiful. Once your faculties are still there, then you can keep going.

“Hubert Ogunde was about 86 when he featured in ‘Heart of Darkness’. It was from that production that he was taken abroad and he died there.”

The ultimate fulfilment, for Joke Silva, is similar to the legacy she intends to leave behind.

“When I see long running shows, when I see theatre being able to show its economic viability, which would be fantastic. When people can choose what they want and not just what they can get, that time is coming.

“I look forward to when Nigeria becomes the cultural value for Africa, it would happen because of the culture diversity that we have,” said the veteran who has two films in the pipeline and a TV series whose name “can’t be disclosed yet”.