I Believe my Music was ‘God Called Me To Make Music’ – Orezi 6 THINGS WE LEARNED FROM M.I’S INTERVIEW TODAY ON RUBBIN’ MINDS (WATCH)

Singer Orezi, in a new interview, talked about the ‘Fake Love’ syndrome the industry is plagued with.

While speaking with Planet TV, the ‘Double Your Hustle’ crooner, said there is actually no love in the industry citing the death of late Eric Arubayi as an example.

According to Orezi, several artistes posted photos of the deceased on their social media pages upon his death a thing they never did while he was alive.

Orezi, further talked about this kind of act affecting even the upcoming acts as no one wants to associate themselves with them until of course they make a name for themselves.

Recall the beef between singers, Orezi and Dammy Krane? Ycee has wadded into the issue when he threw an indirect jibe at Orezi.

Although Orezi said that he and Dammy are cool, Ycee in an interview with Hip TV has said that there are more important things for artistes to concern themselves about. This is in response to Orezi saying that no Nigerian artiste should copy his hairstyle.

Let’s see if Orezi will respond.

Orezi aka Alhaji is known for his two hit singles Rihanna and Shoki. The singer visited Naij.com where he talked about his music and gave his opinion on the Skiibii saga. Orezi also taught Naij.com staff to do his version of the Shoki dance. Read the interview and check out the video below.

When did you decide to go into music? It started a couple of years ago. I was never in the choir like every other (musician) will say. My family loves music, especially my dad. Then I developed the talent for writing when I got to secondary school. When I got to the university the love for music got stronger. Then I decided to know how I sound; so I went to the studio for the first time in 200 level (second year) and the rest is history. When I finished from the university in 2010, I ventured into music professionally.  You said you are a songwriter; how is writing a song compared to singing it? It’s amazing how one can put words to paper and put melody into it. It is a lovely feeling. I felt like my writing needed melody that was how the need to start singing them came.

Your major challenge since you started music? I had to face the challenge of acceptance when I started, I couldn’t figure out why it was like that. People couldn’t relate with my songs and give me the celebrity status I deserved. It was a major setback but at the same time, I realized it wasn’t just my time, when my time came, I blew up big time. What took you so long to make an album? Well, there were a lot of hurdles to cross. I had to deal with the issue of finances. The label where I was before got broke. There was a major setback then and I needed to move further. I tried to get signed on to HKN, but for some reason we couldn’t get the deal done. Now I am signed on to Sprisal and we are doing pretty well that is why I want to release the album.

Why Ghen Ghen as an album title? Ghen Ghen has been associated with me for a while. I have been using it from way back. I coined it myself and it simply represents who I am. It’s like an extraordinary guy, something action packed that stands out. When it was time to pick an album title, I didn’t think twice. I felt it was a perfect title because it’s something I want to promote. So, using it as title was the best option for me. READ ALSO: Read Why Star Singer Issued Firm Warning To Davido, Wizkid, Iyanya Apart from Shuperu, Shoki and other known hits, what else should fans be expecting on Ghen Ghen? My track list consists of two songs you’ve heard before, Shoki and Shuperu. So, you will be listening to 14 to 15 new songs. If you enjoyed my previous efforts, I can assure you, you will love these new 14 tracks. I have put in a lot of work. It’s an album that will blow your mind. Any international collaboration? Expect some on my album. I have someone in the UK. He has had hits. We met during summer and I felt working with him would make me penetrate the UK market. We hooked up for Shuperu Part 3. So expect that. I don’t want to mention names.

The Nigerian music industry is highly populated, what stands you out from the crowd? I am different because my music is different. All my songs are a break from the norm. Check out Rihanna, Shoki, You Garrit, Shuperu – you will know what I mean. I don’t say what someone has said before; I am so unique I set the pace. When I used alerts, everyone started putting alerts in their songs. The lyrics on Shuperu are not something you will hear everywhere, like – aiye ope meji omo iya oni bredi; they are different. I try to be a fan of myself I listen before I put out content. You featured on Harrysong’s Reggae Blues along with Olamide, Iyanya and Kcee. What was it like working with top acts like these? It was a good experience. I felt privileged to be part of the project because Harrysong has been a brother. We’ve hustled together in the same terrain. We’ve been in the same studio, recorded with the same producer, slept in the same house since 2010 before 5Star Music came for him. So when he called me, I was like, it is about that time. It was only Harrysong and me on the track before Kcee, Olamide and Iyanya later joined. So when I heard the final production, I was elated like – “See the superstars I dey with.” I feel good that the song is doing well.

What was your biggest collabo? I have a lot of collaboration on my album but from the ones you heard it has to be Reggae Blues and for the ones you’ve not heard it has to be Orezi featuring… I don’t want to say it. Wait for it, coming soon. Apart from music what other things do you do? I am a landscape architect. I draw plans – urban and regional planning. I know how to cook spaghetti. My spaghetti can make a girl fall in love. I chew my nails. That’s all I can remember for now. Message to your fans You all should watch out for my album on September 1, titled Ghen Ghen. It is going to be the baddest album this year. I don’t think any other artiste can come close. The only person I feel can match what I want to offer is Wande Coal. I am his biggest fan and I think he is one of the best artistes in Nigeria. I also anticipate his album. Aside from Wande, everyone should just go and chill. It’s Orezi’s time.   Orezi also spoke on the sort of controversy on who the originator of Shoki dance is as well as gave Naij.com staff a mini tutorial on the dance. 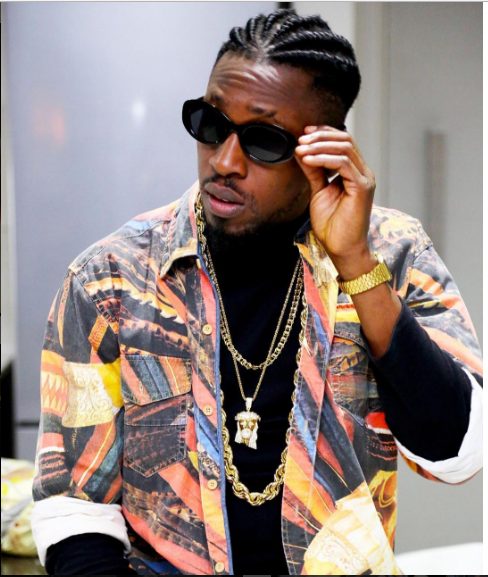