★ Advertise and Sell your Products, Merchandise, Music, Videos & Get promoted by the ★STAR★ Call to Place your advert on this Channel★
Africa’s Richest Music Video Directors In Nigeria …Clarence Shotit Still Tops the List Asa Singer’s, Encounter with a taxi driver in France shows that Nigerian music is exploding

10 minutes with MATTMAX (video director) by Edward Fortune..
The story of Mattmax, a creative music video director who D’banj describes his creativity as “out of this world”, reminds one of these bible verses “despise not the days of thy little beginning” and “whatsoever thy hand finds to do; do it with all your might”. 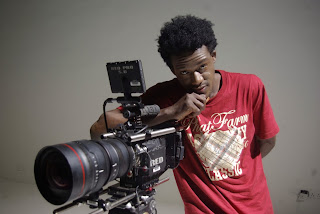 Born to Christian parents and christened Matthew Abiodun Aina, who later got the name Mattmax from a friend who sees his ideas flowing through his mind as maximum. The Computer Science graduate from Yaba College of Technology journeyed into visual effects because of the passion he has for entertainment which was fueled by the challenge he got from Remi Oni who used to be the graphics editor of erstwhile Global Sound which Femi Aderibigbe- Kwame used to present. Mattmax said “Having seen what Remi does with visuals then, I tried reaching him on phone for over six months, and when I eventually got in touch he asked me to challenge him.” And that’s how the journey into fame land began.. With 7 nominations in the forth coming NMVA awards, its so obvious he’s here to stay and gain his spot in the industry. I caught up with MATTMAX and though very busy, he spared 10 minutes of his precious time to have this chat…
10 minuted with MATTMAX by Edward Fortune…
E.F: So far, how would you say the journey has been?
MATTMAX: All glory and honour to the almighty God for bringing me this far. The journey was rough but there seem to be a light at the end of the tunnel.
E.F: Having worked with the cream-de-la-cream in Nigeria music industry, who would you say gave you more challenge work wise?
MATTMAX: Well, every artiste I’ve worked with have their own peculiar nature and you know their songs are quite different. Every location has its own challenges in terms trying to get the best out of each job. Regarding the artistes I’ve worked with, I’m lucky they are all interesting and professionals, so personally they are not problematic, though there are always hiccups on set but so far so good, it’s been a jolly ride.
E.F: Shooting “Don’t Tell Me Nonsense” by Dbanj, share your experience.
MATTMAX: I must tell you that it’s a big honour and priviledge working with Banga Lee who happens to be one of the biggest acts to come out of Africa. D’banj is a big fish and an International brand, so working with him is a big honour and I thank God the job was well accepted and had been enjoying massive airplay because adrenalin was high before the release. I wasn’t so sure what the reception would be like, but I know I gave the job my 101percent.
E.F: 7 nominations in the forth-coming NMVA. What does it mean to you?
MATTMAX: Well, it simply means my job is getting recognition at last because before now, only a handful of people are ready to give me a chance and I see it as a disease that plague our society. Young people are not been giving enough chance, so the only option is to grab and cease every opportunity to showcase the stuff you are made up if you have the chance.
E.F:  One thing a cinematographer must know?
MATTMAX: Your shots must be precise. Cinematography is all about making good use of every picture and shots. The ability to visualize and capture it in pictures.
E.F: Who comes up with the script for videos? You or the artist?
MATTMAX: It depends. There are times the artiste have the picture of what his or her video would look like while writing down his or her songs. The artiste most times will narrate his or her story and the director can build on it. And at times the creative comes from the director and his production crew.
E.F: What would it take to have Mattmax direct a classic and record breaking video?
MATTMAX: Good songs. Good songs motivate me to give my best. If I can’t give the job my all, I will rather turn it down instead of doing it for the sake of the money. At that, if a song is averagely good, a good music video van propel it into acceptance.
If you like this, please share!