★ Advertise and Sell your Products, Merchandise, Music, Videos & Get promoted by the ★STAR★ Call to Place your advert on this Channel★
The 2face Idibia NET Interview: ‘Marriage has made me more responsible French Cheer Legendary Gangster’s Daring Prison Break 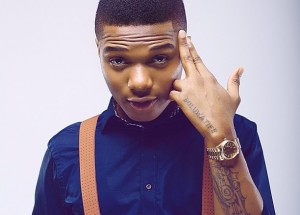 3) He is the last and only son in the family.

4) His favourite Color is Black.

5) Wizkid holds the record for the highest number of Celebrities feature (Cameo Appearance) on a Music Video in Africa – ‘Tease Me’ & ‘Pakurumo’
6) Wizkid got his first car in 2011 Black Honda Accord i-VTEC.

7) Wizkid started off singing at 11 under the name ‘Lil Prinz’.

He formed a group back then at 11, Glorious Five.

9) His Group, Glorious Five went on to release a 7-Tracker Album and released the album in the Church.

12) His first break-out in the Industry was his feature on MI’s Fast Money, Fast Cars in 2009.

15) Wizkid was in the studio when 2face Recorded ‘Grass To Grace’ and Soundsultan recorded Jagbajantis.

17.) Wizkid’s Baby Mama, Oluwanishola Ogudugu just rounded off her NYSC. She studied at Houdegbe North American University, Cotonou. Her Buzz at School then sprung up her affair with Wizkid after he performed at the School which resulted in a child – Boluwatife.
They not together anymore.

18.) Wizkid dropped out of Lead City University in 2011 into his 3rd Year where he was studying ‘International Relations’.

21.) Wizkid is currently in a relationship with half-caste, Tania Omotayo.

26.) He currently has over 697k followers on Facebook making him the second highest followed Nigerian Musician after D’Banj.

27.) He currently hold the record for the Highest paid Pepsi Ambassador in Africa.

28.) He presently has Endorsement Deals with MTN.

29.) Wizkid is the youngest Nigerian artiste to put out an internationally recognized album.

32.) Wizkid’s Hit Track – Azonto is 3rd Place on the non-American songs of 2013 according to FeedBuzz.com.

33.) Wizkid was booked all through December of 2012, sometimes he had to shuttle between 4-5 shows.

34.) Wizkid’s Tease Me spurred out of his provocative conversation with his Dad who has 3 wives

35.) One Of Wizkid’s biggest track in 2013, Samba was recorded & produced in 1hour by Seasoned Producer, Sarz.

36.) He is currently the Most Influential African artiste on Twitter due to his Popularity base having over 1 million followers.

37.) He had his first ever recording with OJB Jezreel at 11.

38.) Wizkid has more collaboration than any other Nigerian artiste (both Local & International).

40.) His next and second album is titled, ‘CHOSEN’ is due for release anytime soon.

Wizkid has gotten a total of 24 Nominations for top Major Awards, out of which he’s won 13. He just recently got 3 Nominations at World Music Awards.

Wizkid is reportedly Nigeria’s Freshiest Artiste + 1 – Wizkid was featured on Channel O / Forbes List of Africa’s Most Bankable Acts, He was placed 5th in Africa. Five places above E.M.E Boss.

10 FACTS YOU DID NOT KNOW ABOUT WIZKID