Adekunle Gold, a singer on the YBNL roster, has made into the World Album category of the Billboard Music Chart.

The singer’s ‘Gold’ album, which has been enjoying massive radio airplay, enters the chartless than two weeks after its release.

Gold’s debut album was originally scheduled to be released on July 28 but the artiste decided to end the anticipation of his fans by putting out the record three days before the due date.

The record which sees the multi-talented Gold explore different sounds, is currently the highest ranking debut album on the World Album category. 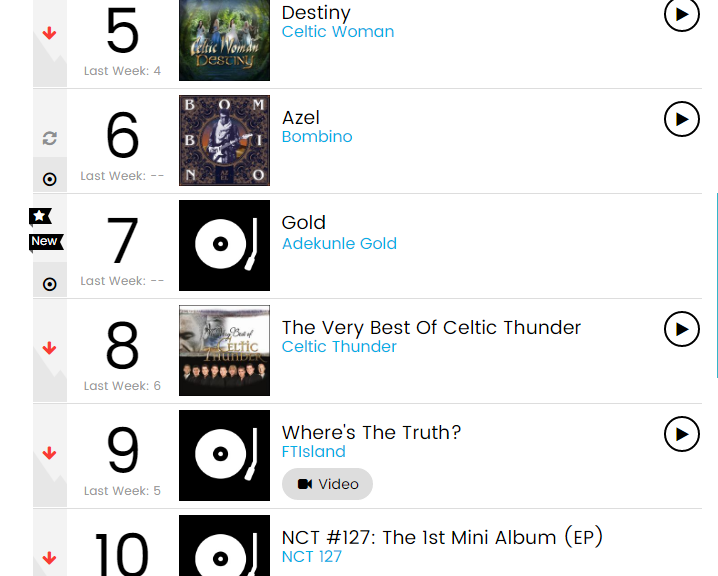 Adekunle Gold – sitting pretty at No. 7

Debuting in seventh position in its first week on the chart, the ‘Gold’ album may further rise or fall, depending on its performance in coming weeks.

The 16-track album features only one artiste, Simi, a singer and producer, who is responsible for 99% of the mixing and mastering of songs on the record.

The artiste, whose real name is Kosoko Adekunle, graduated from Lagos State Polytechnic with a degree in graphic design.

Gold began his foray into music in 2010 through the formation of ‘The Bridge’, a boy band with his best friend SeyiKeyz.

After releasing three songs — No Sleeping on a Bicycle, Norm Breaker featuring Skalesand a cover of John Legend‘s All of Me — Adekunle Gold ventured solo in 2013.

The release of Sade, a cover of One Direction‘s Story Of My Life, served as the launching pad for a vibrant music career, having made a name for himself as a creative graphic designer.

Owing to the success of Sade, Gold signed to YBNL Nation in December 2015 and released three equally successful follow-up singles – Orente, Pick Up, and Ready.

In spite of his relative success, the singer recently denied planning to ditch the YBNL (Yahoo.Boy.No.Laptop) record label.

“People must know too much. They must be in YBNL to know this gist. There’s no such thing, I am not leaving YBNL”, Gold said.

Some of the producers who worked on the Gold album include Masterkraft, Pheelz, Seyikeyz, Oscar, B Banks and Sleekamo.

2face Idibia’s Ascension; Reminisce’s Baba Hafusa and New Era by Kiss Daniel are some of the few Nigerian albums that have made the Billboard World Album Charts.

Adekunle Gold, whose musical influences are King Sunny Ade and Ebenezer Obey, is also known as the ‘King of Photoshop’.