Chiwetel Umeadi Ejiofor,[3] CBE (/ˈtʃuːɪtɛl ˈɛdʒi.oʊfɔːr/ CHOO-i-tel EJ-ee-oh-for; born 10 July 1977)[3][4] is an English actor.[5] After enrolling at the National Youth Theatre in 1995, and attending the London Academy of Music and Dramatic Art, at age 19 and three months into his course, Ejiofor was cast by Steven Spielberg to play a supporting role in the film Amistad (1997) as James Covey.[6]

Ejiofor portrayed the characters Okwe in Dirty Pretty Things (2002), The Operative in Serenity (2005), Solomon Northup in 12 Years a Slave(2013), Dr. Vincent Kapoor in The Martian (2015), Karl Mordo in Doctor Strange (2016), and most recently Scar in the upcoming The Lion King (2019). For 12 Years a Slave, he received Academy Award and Golden Globe Award nominations, along with the BAFTA Award for Best Actor. He was nominated for a 2014 Primetime Emmy Award for Outstanding Lead Actor in a Limited Series or Movie for his performance on Dancing on the Edge.[7]

Ejiofor has received numerous awards and nominations for acting, including the BAFTA Orange Rising Star Award in 2006, two Golden Globe Award nominations, and the Laurence Olivier Award for Best Actor for his performance in Othello in 2008. In 2008, he was appointed Officer of the Order of the British Empire by Queen Elizabeth II for services to the arts.[8] He was elevated to Commander of the Order of the British Empire in the 2015 Birthday Honours.[9]

Ejiofor was born in London’s Forest Gate, to Nigerian parents.[10] His father, Arinze, was a doctor, and his mother, Obiajulu, was a pharmacist. His younger sister is CNN correspondent Zain Asher.[11]

In 1988, when Ejiofor was 11, during a family trip to Nigeria for a wedding, he and his father were driving to Lagos after the celebrations when their car was involved in a head-on crash with a lorry. His father was killed, and Ejiofor was badly injured, and received scars that are still visible on his forehead.[12][13]

Ejiofor began acting in school plays at the age of fourteen at Dulwich College and joined the National Youth Theatre. He got into the London Academy of Music and Dramatic Art but left after his first year, after being cast in Steven Spielberg‘s film Amistad. He played the title role in Othello at the Bloomsbury Theatre in September 1995, and again at the Theatre Royal, Glasgow in 1996, when he starred opposite Rachael Stirling as Desdemona. 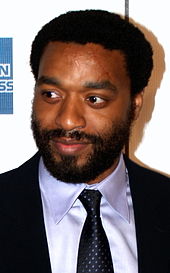 Ejiofor at the 2008 Tribeca Film Festival premiere of Redbelt

Ejiofor made his film debut in the television film Deadly Voyage (1996).[14] He went on to become a stage actor in London. In Steven Spielberg‘s Amistad,[14] he gave support to Djimon Hounsou‘s Cinque as interpreter Ensign James Covey. In 1999, he appeared in the British film G:MT – Greenwich Mean Time. In 2000, he starred in Blue/Orange at the Royal National Theatre (Cottesloe stage), and later at the Duchess Theatre. That same year, his performance as Romeo in William Shakespeare‘s Romeo and Juliet was nominated for the Ian Charleson Award. Ejiofor was awarded the Jack Tinker Award for Most Promising Newcomer at the Critics’ Circle Theatre Awards in 2000. For his performance in Blue/Orange, Ejiofor received the London Evening Standard Theatre Award for Outstanding Newcomer in 2000 and a nomination for the Laurence Olivier Award for Best Supporting Actor in 2001.[15]

Ejiofor had his first leading film role playing Nicky Burkett in Jeremy Cameron‘s It Was an Accident (2000). In 2002, he starred in Dirty Pretty Things,[14] for which he won a British Independent Film Award for best actor. In the following year, he was part of the ensemble cast of Love Actually,[14] starred in a BBC adaptation of Chaucer’s The Knight’s Tale and also starred on the BBC series Trust. Also in 2003, he starred in the lead role of Augustus in the radio production of Rita Dove‘s poetic drama “The Darker Face of the Earth”, which premiered on the BBC World Service on 23 August of that year, marking the International Day for the Remembrance of the Slave Trade and its Abolition. He starred alongside Hilary Swank in Red Dust (2004), portraying the fictional politician Alex Mpondo of post-apartheid South Africa. He played the central role of Prince Alamayou in Peter Spafford’s radio play I Was a Stranger, broadcast on BBC Radio 4 on 17 May 2004, and he played the god Dionysus, alongside Paul Scofield‘s Cadmus and Diana Rigg‘s Agave, in Andrew Rissik’s play, Dionysus, based upon Euripides‘ Bacchae, also broadcast by the BBC. He played Mike Terry, in the cult film Redbelt that received favourable reviews. He also received acclaim for his performance as a complex antagonist The Operative in the film Serenity (2005).[14] Ejiofor played a revolutionary in the film Children of Men (2006).[14] His singing and acting performance in Kinky Boots received a Golden Globe Award[14] and British Independent Film Award nomination. He was also nominated for the BAFTA Orange Rising Star Award in 2006, which recognises emerging British film talent. Ejiofor’s performance in Tsunami: The Aftermath received a Golden Globe Award nomination for Best Actor – Miniseries or Television Film in 2007.[14]

In 2007, Ejiofor starred opposite Don Cheadle in Talk to Me,[16] a film based on the true story of Ralph “Petey” Greene (played by Cheadle), an African-American radio personality in the 1960s and 1970s. He performed on stage in The Seagull at the Royal Court Theatre from 18 January to 17 March 2007, then later that year reprised his role as Othello at the Donmar Warehouse, alongside Kelly Reilly as Desdemona and Ewan McGregor as Iago. The production received favourable reviews, with particularly strong praise for Ejiofor. “Chiwetel Ejiofor produces one of the most memorable performances of Othello in recent years”.[17] He was awarded the Laurence Olivier Award for Best Actor for his performance.[14] He also narrated for the BBC television film, Partition: The Day India Burned (2007), which was based on the Partition of India.

Ejiofor was appointed Officer of the Order of the British Empire (OBE) in the 2008 Birthday Honours.[18] In the same year, he made his directorial debut in the short film Slapper, which he also wrote, based on an idea by editor/director Yusuf Pirhasan.[19] Ejiofor appeared alongside John Cusack in the film 2012 (2009). The film went on to gross over $700 million, and is among the list of highest-grossing films of all time and placing 5th of top films of 2009. He played CIA officer Darryl Peabody in Salt (2010), and the Golden Globe Award-nominated leading role of band creator Louis Lester on the BBC Two drama series Dancing on the Edge (2013), which played on Starz in the United States.[14]

In 2013, Ejiofor took on the role of Solomon Northup in 12 Years a Slave. The film was based on Northup’s memoir, edited in 1968 by historians Sue Eakin and Joseph Logsdon, of Northup’s experience as a free black man in New York, who was kidnapped in 1841 and sold into slavery in Louisiana. On casting, director Steve McQueen said:

Chiwetel Ejiofor was always going to be Solomon Northup for me. I was looking for someone that had that genteelness, that kind of humanity. Knowing that humanity was going to be tested under certain duress and circumstances, I needed a person who could actually keep hold of that, even through periods of extraordinary trying and extraordinary situations where it would be tested to its absolute limit. He was the only person.[20]

At the Toronto International Film Festival, Ejiofor said he briefly hesitated about playing Northup. “You wait all your life for a great script to come through the door. You’re hassling your agent and all that, and then it comes and you read it and your first reaction surprises you. Your first reaction being, ‘Can I do this?'”[21] He accepted the role about 24 hours later.[22] As part of his preparation, Ejiofor learned to play the violin, collected slave stories, maintained a slave’s edge up hairstyle, and engaged in some of the physical labour that Northup did like picking cotton.[23] Since he had not worked with McQueen before, Ejiofor also observed the working dynamic between the director and co-star Michael Fassbender, who worked with McQueen on Hunger (2008) and Shame (2011).[24] On playing Northup, Ejiofor did feel a responsibility, not being American, to get the story of Solomon Northup as current he could, adding “I’ve been very grateful to show the film to his descendants and see them be so proud of it.”[25]

12 Years a Slave opened to wide acclaim, with many critics citing Ejiofor’s performance and declaring him an almost-certain Academy Award nominee for Best Actor.[21][23][25][26] From Owen Gleiberman at Entertainment Weekly: “It is Chiwetel Ejiofor’s extraordinary performance that holds the movie together, and that allows us to watch it without blinking. He plays Solomon with a powerful inner strength, yet he never soft-pedals the silent nightmare that is Solomon’s daily existence.”[27] From Christopher Orr at The Atlantic: “Ejiofor has given notable performances in the past (Dirty Pretty Things, Serenity, Talk to Me), but this is by far his most essential role to date. Stoic, watchful, compromising himself just enough to stay alive, he is the point of stillness and decency around which spin the madnesses of the film.”[28] In his The Hollywood Reporter review, Todd McCarthy wrote, “Ejiofor is terrific in a demanding character who’s put through the wringer physically, mentally and emotionally.”[29] On 16 January 2014, Ejiofor was officially nominated for Best Actor for the 86th Academy Awards on 2 March.

As of September 2013, Ejiofor was slated to portray Patrice Lumumba in a film adaptation of Aimé Césaire‘s A Season in the Congo, a role in which he had performed on stage at the Young Vic. Joe Wright, who directed the play, was to also direct the film.[30][31]

In 2014, Ejiofor starred in the Nigerian film Half of a Yellow Sun alongside Thandie Newton.[32]

It was announced in June 2014 that Ejiofor would play real-life drug dealer Thomas McFadden in film based on the book Marching Powder: A True Story of Friendship, Cocaine, and South America’s Strangest Jail, written by McFadden and Australian journalist Rusty Young.[33] In 2016, Ejifor played Baron Mordo in the Marvel film Doctor Strange.[34] That same year, it was announced that he would play Peter in the upcoming film Mary Magdalene, written by Helen Edmundson and directed by Garth Davis.[35] He was officially chosen on November 1, 2017 for the role of Scar(originally played by Jeremy Irons in the 1994 animated film) for the CGI live action remake, The Lion King (2019) directed by Jon Favreau.[36]

Ejiofor is friends with fellow British actors Benedict Cumberbatch,[37] Idris Elba [38] and Andrew Lincoln, the last of whom he has been close to since they starred together in the play Blue/Orange in London in 2000.[39]

In 2015, Ejiofor was honoured with a Global Promise Award by The GEANCO Foundation, a non-profit welfare organisation in West Africa for his charity work in Nigeria.[40]

On 12 September, Ejiofor, as well as Cate Blanchett, Jesse Eisenberg, Peter Capaldi, Douglas Booth, Neil Gaiman, Keira Knightley, Juliet Stevenson, Kit Harington and Stanley Tucci, was featured in a video from the United Nations’ refugee agency UNHCR to help raise awareness to the global refugee crisis. The video, titled “What They Took With Them”, has the actors reading a poem, written by Jenifer Toksvig and inspired by primary accounts of real refugees, and is part of UNHCR’s #WithRefugees campaign, of which also includes a petition to governments to expand asylum to provide further shelter, integrating job opportunities, and education.[41][42]