★ Advertise and Sell your Products, Merchandise, Music, Videos & Get promoted by the ★STAR★ Call to Place your advert on this Channel★
Star actor, Tony Umez, shared photos of his 4 daughters on Instagram Many comedians copy my jokes —Gandoki

He is one comedian who gets you cracking. He was just Gbenga Adeyinkabut today he is Gbenga Adeyinka 1st GCON. He chats about critics, challenges, what it takes to be a good comedian, why being an MC is more appealing to him than being a comedian, why he left a full time job for comedy and many more. 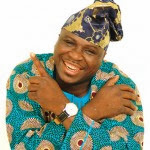