★ Advertise and Sell your Products, Merchandise, Music, Videos & Get promoted by the ★STAR★ Call to Place your advert on this Channel★
Ngozi Okonjo-Iweala -A Biography From Wikipedia, the free encyclopedia ‘I keep my ego in my handbag’ 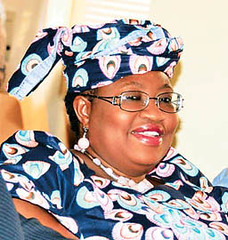 Dr. Ngozi Okonjo-Iweala, Managing Director of the World Bank, is a former Finance Minister for the Federal Republic of Nigeria, has drawn attention to the national debt in Africa’s largest populated state.
Originally uploaded by Pan-African News Wire File Photos

Nigeria‘s growth may be hampered if the Federal Government does not watch the rising domestic debt profile of the country, the Managing Director, World Bank Group, Dr. Ngozi Okonjo-Iweala, has said.

Okonjo-Iweala, who spoke to journalists during the 2010 World Bank/International Monetary Fund annual meetings in Washington DC on Sunday night, said Nigeria must, at the present level of domestic debt, stop its accumulation to prevent unfavourable consequences.

According to her, if a country accumulates a lot of domestic debt, it crowds out its private sector.

Okonjo-Iweala, a former finance minister in Nigeria, who played a major role in the country‘s 2005 Paris Club debt relief deal, noted that the country‘s external debt was low enough at its current level.

The Debt Management Office said recently that Nigeria‘s total public debt had risen by 21 per cent in 2009 to $25.8bn, which represented 13.8 per cent of the country‘s Gross Domestic Product.

The DMO said in an annual report on its website that external debt increased by 6.2 per cent to $3.95bn, while domestic debt increased to $21.8bn, from $17.7bn the previous year.

Eighty-five per cent of Nigeria‘s public borrowing was from the domestic market last year, while 15 per cent came from abroad, the DMO said. The local component climbed from 83 per cent the previous year.

The former minister said, ”External debt for Nigeria is low enough. The problem we have is domestic debt. We have accumulated up to $22bn equivalent of domestic debt, that is, debt that we are taking within the country. That is what we need to focus on. Anytime they talk about debt, people start shouting about external debt.

She added, ”When you accumulate a lot of domestic debt, you are crowding out the private sector. At this level, we must not accumulate more domestic debt because if we do that, it is going to lead to some of the debt problems that we are avoiding.”

Okonjo-Iweala also pointed out the need for the country to support the finance minister ”to have a fiscally prudent approach to managing the resources of the country.”

She said the country would not have been able to manage the global financial crisis but for the Excess Crude Account.

”A lot of spending is going on; the budget has to be managed in a tighter fashion and we have to deal with our fiscal deficit, which, according to what I have read, is going to six per cent of the Gross Domestic Product. We need to bring it back to three per cent,” she added.

On recent reports that Nigeria was still paying back debts of the 1960s, the World Bank MD insisted, ”We have exited the debt trap. We were owing the Paris Club $30bn at that time, and that has been taken care of. What we should focus on now is internal debt.”

She also noted that African economies should not be afraid to take loans from China, saying the continent needed funds for sustainable growth.

”The most important thing is that the investment should be done in a transparent and open manner with all the calculations of what the investment is bringing to the country and what the Chinese are getting, so that everybody knows,” she said.