“I was born in Obalende, Lagos Island,” Jatt says. “I’m pretty much Lagos Island itself,” he adds with a chuckle.

There are a few strands of grey hairs on DJ Jimmy Jatt’s beard; other than this nothing else shows that he is a man who has walked this earth for half a century — not even the way he talks.

He is seated behind a wooden desk in his studio office. A baseball cap covers his hair, a thick frame glasses with brown tinted lens makes it impossible to see his eyes. Somehow, the dark spectacles seem like a fence between Jatt and I: the eyes, after all, is the window to the soul.

“I am a shy man. Very reserved,” Jatt admits as we sit down for our interview. There is a certain openness and laidback vibe about Jatt that feels welcoming yet strict. Jatt is friendly, and it is easy to connect with him. He doesn’t hide much, neither does he make any attempt to whitewash or exaggerate his stories and achievement.

I first met Jatt at the Temple Management Company’s one year anniversary. Cup in hand and dark shades on, Jatt had walked from end to end mingling with guests and other celebrities, laughing and exchanging banter. He recognised one of my former colleagues and came over to shake his hand and exchange pleasantry.

This colleague will later inform me that he had only met Jatt once, briefly, weeks prior. Still, in the semi-darkness of the room, Jatt recalled who he was and where they met and had come over to greet.

Surprisingly too, Jatt remembered me from the party. 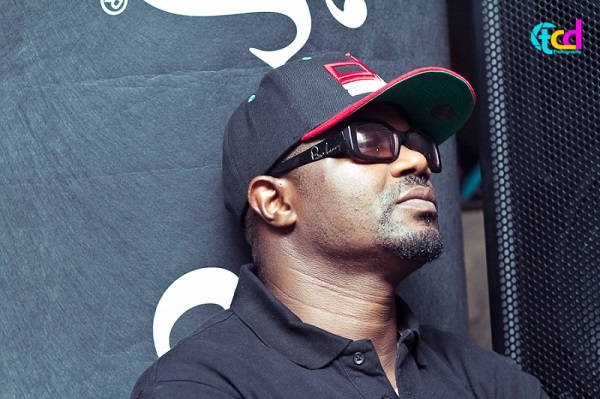 The legend of Jimmy Jatt

On my way to Jatt’s studio, I found an article online describing Jatt as a legend. Using ‘Jimmy Jatt’ and ‘legend’ as keywords, I googled again. As you’d expect, both his name and the word have been used in thousands of online articles – including reference to a song on his 2014 The Industry (Vol 1) album: “I Am a Legend”, featuring Waje, Ruggedman, Eedris Aldulkareem and M.I Abaga.

Jatt has begun to accept it even as he notes that being called a legend can be limiting as he still has a lot to learn and do. Also, the DJ points out, a lot of people are called ‘legends’ for achieving so little and being around for a number of years, so the word itself has lost so much value.

“Sunny Ade, these are the people we should be calling legends,” Jatt is keen to point out. 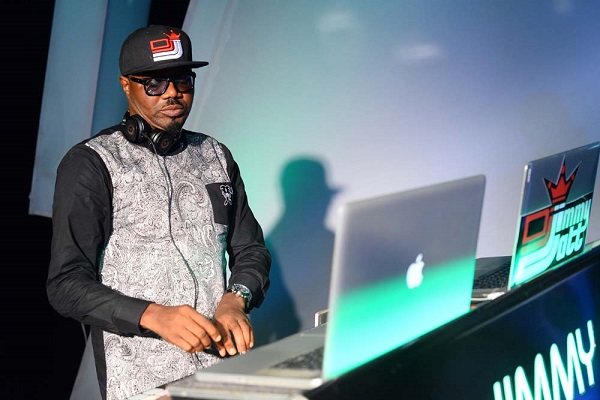 In a way, music found Jatt.

“I didn’t choose music. I was influenced in every way,” he says.

Although he never gave considerable thought to his future career, Jatt says that music was a way of life for him, his father and siblings. Jatt’s father was an importer of electronic devices.

“My dad was the sole importer of Sony electronic in those days,” he said. “He was into electronics and by extension, he was providing music for gigs.”

Because people knew he had the equipment, they came to him for music for their events. Jatt’s elder brothers grew into this too.

As proof of how much influence his elder brothers had on his career, Jatt was coined from the first letters of his name, that of his brothers and their surname.

Even though they are no longer in the music business, Jatt’s brothers were DJs at a point in time, playing at parties and other events.

After working with their father for years, Jatt’s eldest brother eventually set up his own record shop. Jatt, at this time, was in his early teens. 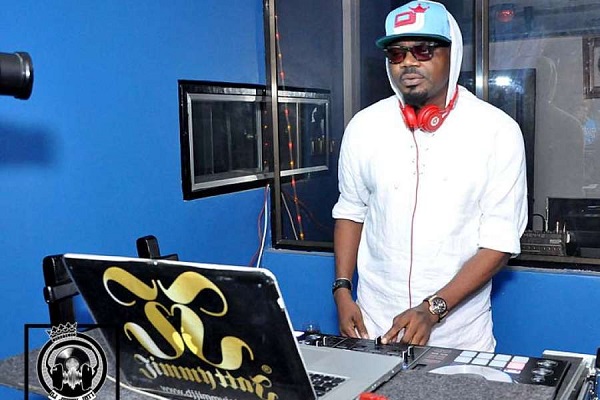 It was Sugar Hill Gang – an American hip hop group – that made Jatt fall in love with the rap genre. His elder brother had purchased a 12-inch vinyl copy of the group’s 1979 hit song – Rapper’s Delight. Then in his early teens, Jatt memorised the lyrics of the rap song.

Since the song was on a vinyl disk – where songs were recorded on both sides of the disk; instrumental on one side, vocals on the other – Jatt would flip the disk to instrumental only so he could rap along.

He used to perform his cover of Rapper’s Delight before his family and pretty soon, his elder brothers began taking him to parties where he’d perform the song in front of a large audience.

“I was really too young to attend those parties,” Jatt says, a small smile playing on the sides of his lips.

With time, he started swapping the lyrics of the song, adding his, growing steadily, finding his own flow and rhythm and, eventually, identity as a rapper. And it was from Sugar Hill Gang that he got his first stage name: Master J.

“Diversion towards being a DJ that made me give up trying to become an artiste. But I’m glad I became a DJ. If I had been an artiste by now – mehn! – career would be over. How many albums will I release since then and now?” Jatt asked.

I had no answer. He was, in fact, right. Rappers, unlike DJs, have a lower shelf life.

Back in the early ‘90s, Jatt hosted and DJed at a street carnival: Road Block. Rappers came to the carnival to battle, spitting bars and rhyming, all in an effort to outperform their opponents. “Then it wasn’t a question of who was better, every rapper that battled was good. It was difficult choosing the winner.”

Comparing the hip hop scene of then and now, “watered down” was the phrase he used in describing present day rap songs.

Jatt explains that rap songs of nowadays are far different from what it was when the rap genre came into limelight. To achieve mainstream success, Jatt points out that rap artistes are finding ways of making their songs more commercially appealing, even if it means being “watered down”.

This is not peculiar to Nigerian. It is a global issue as rappers across cultures and countries are finding ways of fusing styles and sounds.

Although he misses the sound of the old days, he understands that the times have changed and evolution could also be progress. So he accepts it and moves on. 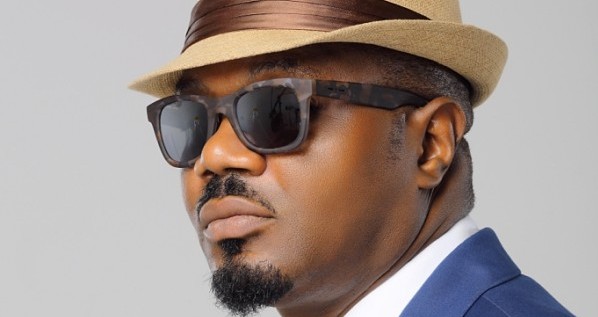 Evolution of sounds and sanctity of respect

Using his finger tip, Jatt taps on his well-polished tabletop, takes a sip of his drink before launching into another conversation on why he gets frustrated when people complain about modern (present-day) Nigerian music.

As a DJ, Jatt has worked with several A-list artistes across the continent, his discography includes hits from the early 2000s to date, so he – more than anyone else – understands the growth and direction of the industry.

To him, the music industry in Nigeria has come a long way and evolution will continue to happen: sounds and styles will keep evolving.

Respect is quite important to Jatt. He was raised to be respectful to his elders. “I don’t want to be tribalistic but it is a Yoruba thing, part of our culture,” Jatt says.

He goes into a winding discussion on the importance of respect, pointing out the intricacies of the Yoruba language in relation to culture. Truth be told, I am, at this point, lost and confused as he goes deeper and deeper into the rudimentary grammar and style of the Yoruba language when it comes to respect.

As if sensing my confusion, Jatt says: “You’re not Yoruba, you would have understood better if you were.”

To have lasted so long in the industry and become so influential and successful in life, Jatt points to respect. Respect is important. And because respect is very much reciprocal, it is imperative that it extends to everyone regardless of age or social class.

“I say thank you to my security man even though I pay him,” he points in the general direction of the compound’s gate. I imagine the passion burning in his eyes, underneath those dark shades as he speaks on this.

“It is not a question of age, everyone deserves to be respected”. This is Jatt’s argument and strong belief. This has driven his career over the years, given him staying power to remain relevant across multiple generations, and maintain a mutually beneficial relationship with artistes across age.

I ask Jatt about the people he has mentored. He makes a joke about being a “grandfather mentor” because those he mentored and taught have gone on to mentor and teach other people.

At 50 and after nearly three decades in the industry, Jatt isn’t retiring anytime soon. His job affords him the opportunity to travel. “I’ve been to almost all the states in Nigeria,” he says.

Jatt references King Sunny Ade who, despite his age, still plays and performs music. There is no retirement in Jatt’s agenda – not anytime soon.

A number of times in the past, Jatt says he had promised himself that he’d quit the industry. Each time he attempted to quit, something new and bigger comes to hold him back. First it was in his twenties before he got married; Jatt said he’d leave DJing. He didn’t.

“One guy like that gave me his daughter to marry!” Jatt says, placing his hand on his forehead and chuckling, a low chuckle that could easily be missed. You see, back in the days, entertainers had a bad reputation. So Jatt was worried that being a DJ would affect his chances of a good marriage. And he wanted nothing more than to reassure his prospective in-laws that he was responsible and capable despite his career choice.

He did get married after all, and surprisingly, his music career grew bigger afterwards. “My wife came with a lot of luck,” he adds.

Same after his children were born, Jatt was worried that they would be looked down upon by their peers for having a DJ father. He wondered how his children will feel when asked what their father does for a living?

Again he didn’t quit. His career got bigger. His children turned out fine. At a point, Jatt decided to stop questioning the will of God and accept his blessings.

With a career spanning over 20 years, Jatt has had little or no controversy. I tell him that I googled and researched for any major controversy. I didn’t find any.

Jatt is laughing. He says he has had one controversy: one writer found out that he chewed gum a lot and decided to make a big deal out of it.

Over the years, three things have kept Jatt in check: his mother, a determination not to disappoint his father-in-law, and his children.