He’s the only child of Donald and Melania The 25 Best Notorious B.I.G. Guest Verses Of All Time

Veteran Nollywood actor Olu Jacobs have responded to Pete Edochie’s claim that he (Olu Jacobs) destroys the Igbo culture the way he plays the role of Igwe in tradional films. Olu Jacobs response was part of a lengthy interview where he was asked to share his opinion regarding Pete’s statement.

Below is what Olu Jacobs have to say regarding his colleague and veteran actor Pete Edochie:

Pete Edochie once said you destroy the Igbo culture the way you act the Igwe in movies?

I’m surprised Peter can say that. Olu Jacobs is an actor; he’s a fine actor, he’s the best analyzer of character and the best manipulator of words. If some people, for whatever reason, say that the hundreds or thousands of fans who phone and come to applaud me everyday don’t not know what they are saying, that they don’t know what they are doing… I’m talking about real Igwes who meet me, not in their palaces but at airports, outside and they call me to tell me how much they appreciate what I am doing.

This happens everyday, even today. Do you want to tell me that those people don’t know what they are doing? Do you want to tell me that it’s only Pete who knows what he’s saying? What about the producers who commissioned this story, do they not know whom they want for what role? Is he saying that those producers don’t know what they are doing? Whatever he says about me, he must say about them because I didn’t write the script myself, it wasn’t my film. I want to end this topic by saying, I, Olu Jacobs respect and admire our way of life and I will do anything to propagate it, honestly and sincerely.

Our children watch us, what we present to them, what they thought they never had. Our children thought they didn’t have a past, we are the ones letting them know that we had a glorious past. We may have our hiccups at the moment but our present is as good, if not better than our past. We don’t live on trees. We live where every normal human lives and we shall continue to work hard. I want to tell you that Pete is my younger brotherbrother, forget the red cap.

If we meet outside he must show respect. He can think whatever he likes, he has every right to his own opinion but I don’t have to agree with him. In this case, I totally disagree with him. I believe that in this case, he should have re-educated himself well enough before making any comments. I don’t know what’s behind what he has said, but I know he’s not being honest.

Someone said there is a feud between two of you. Is this true?

As far as I am concerned, I don’t have anything against Peter. His two children are my children and we’ve being working together. We both have a working relationship. He called me some three weeks ago; somebody wanted an interview and he wanted me to grant the interview and I did. I don’t have anything to hide and I see no reason why I should . I would rather advice that his questions be directed to the marketers who bought and commissioned the play. 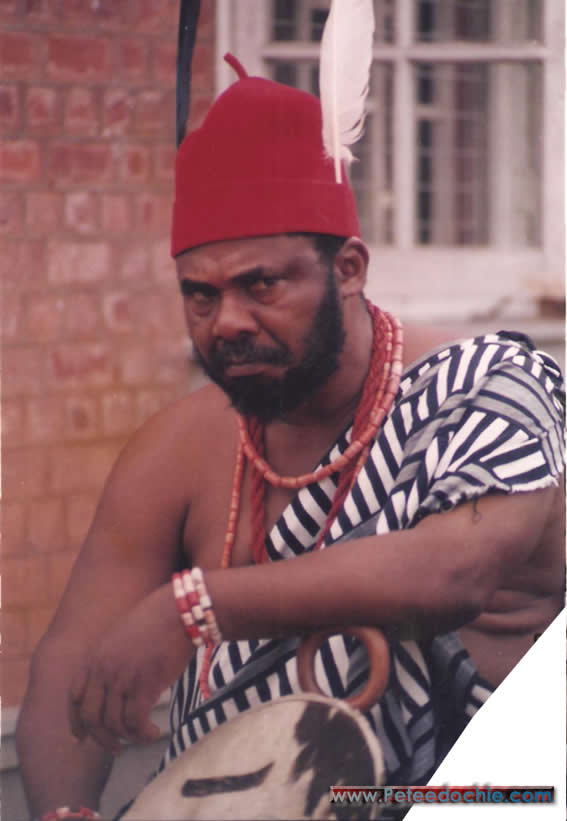 Some even said, perhaps it’s because you get the Igwe role more than he does?

(Chuckles) I think that question should be directed to the owners of the movie. I don’t know what’s at the back of their mind. All I know is that, I get called to do movies , I do them to my best. Maybe Peter knows something I don’t know.

Do you think Olu Jacobs destroy the Igbo culture the way he acts the role of an Igwe? Anyway, it seems the role of Igwe in Nigerian movies is constantly juggled between the two veteran actors whom are both very good at playing the role of a king in Nollywood films. We hope they settle their differences.