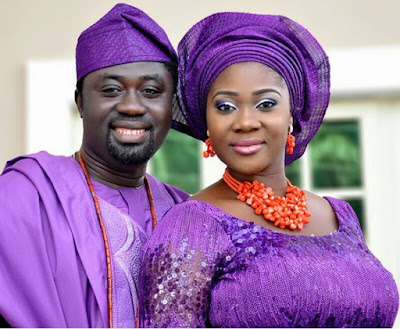 You have been on the ground since 2004. What would you say after thirteen years of acting?

I have progressed. I’m fulfilled. And it has been awesome.

In 2004, you were a young lady just leaving secondary school and moving into the movie industry, did you have any fears while starting out?
Yes, of course. You know, the regular ones though, like uncertainties: would l get roles? Would I make ends meet here? The normal jittery.I was and still the usual girl next door. I was a young girl trying to make ends meet. That was nothing extraordinary about me back then.

What do you think has built your brand?

I think a lot of experience has sustained me. I have learnt so much and I am still learning. Other factors are: God, perseverance and practice.

Besides being an actress, you are a mother and the Senior Special Assistant to the governor of Kogi State, how do you marry everything?

I will say God has been very kind.

What is your work schedule like as the SSA?

We have a number of projects we are working on. We are trying to revamp the state in line with the set agenda of the governor, especially in entertainment and culture. Right now, we have a talent hunt in acting and singing. After that we will be moving onto culture and arts. We also have plans on shooting historic movies around the local government areas. I believe that culture existed before religion.

We want to bring our culture back to the system. We want to teach the young ones our history and roots, so that they can accept who they are as a people. All the governor wants is progress and he sees human development and empowerment as key. He has embraced these projects 100 per cent.

Do you see yourself making lots of impacts while in government?

Well, in the end, I believe we would have made a lot of progress. I believe in making impacts; in instituting positive change and bringing the dividends of democracy to the people. And I think the governor believes and thinks along that line as well. So, we are doing everything possible to make sure people are safe, that life and property are protected and projects are going on smoothly. We do not play with human development and empowerment. I really hope that we’ll make progress.

During the week, you were in Asaba [Delta State] for a movie production?

Considering your many hats, what is Mercy Johnson’s regular day like?

It is all about priorities for me. I have things done based on my scale of preference. Everyday, I put God first, my family next and then work.For instance, at the moment, I am in my husband’s family house in Edo State. It is like an hour thirty minutes to Asaba. In the morning after cooking, I go to Asaba at 10 O’ Clock, I shoot and at 6 O’ clock and I am heading back home. I make dinner. After everyone has eaten, then I can face other things.

[Sounds of children playing in the background] (As you can see, they are playing now.) Sometimes, when I am not working, I stay with them, you know, to be the home-mom that I am. Like now, I chose to work outside Lagos because my kids are on holiday and we wanted to see grandma.

By grandma, do you mean your husband’s mom?

Looking at past events in the entertainment industry, what would say is the biggest challenge with having a good relationship with mother-in-laws in general?
I don’t know. I am simply African. My mother-in-law is like my mother. I don’t see any difference. If you treat your mother-in-law nicely and respect her, she will probably reciprocate. You must also make sure to avoid all forms of competitions or rivalry.

Do you have a nickname for your mother-in-law?

I call her Ine [mother]. I am a traditional African woman.

What does she call you?

Our wife [says it in Esan language] [Laughs]

You are from Kogi State and your husband is Esan, Edo State. How do you handle the language barrier, especially with your extended family?

I speak Esan very, very well. I am crazy about my husband. I do anything that makes him happy. I understand the language to the core.

From your Wikipedia entry, your kids have Igbo names?

No. The internet is wrong. I have Purity Osebhajimente Okojie, Henry Ehizele Okojie and Angel Onosetale Okojie. They all have Esan names.

Are we expecting another baby soon?

Yes! [Laughs] Mother of many nations!

And some people might be asking if you have a number in mind?

People should not be crying more than the bereaved. We want to be very plenty. (I am kidding o!) I love kids, but there is a limit. I have always wanted four. I already have two girls and a boy. So, I need a boy.

To so many people your views about family might be rare. What do you have to say?

For me, that is how it is supposed to be. I don’t know how to explain these things. It is just my ideology of how a home and marriage should be like and that is how I live my life. I think it is just my personality. I am essentially an African woman. So, I think I derive some of my views from the core African value systems. And I am proud to fly that flag.

Is it something you imbibed as a child growing up?

No. I wouldn’t say that. I think it is how I think things should be done. You know, something I believe in. My heart tells me it is right and I just do it.

After “Heart of a Fighter” in 2011, it seemed as though your career took a dramatic upward turn. Do you share the same view?

Yes. Heart of a Fighter is one of my best movies. Playing Dubem was particularly fun for me because she was a tomboy, a trouble maker and someone who is loud. At that time, it was a role I hadn’t played before. So, it was a good adventure. When I read a script and I get excited about a character, the job is more or less done. I am a very adventurous person. My excitement most time is driven by the extent of my imagination about a character. I also stay in front of the mirror and I just tell myself what I am going to do with that character. Majorly what makes character I play stand out are grace, persistence and practice. (I try to bring out the best in anything I do.)

You acted alongside Ramsey Nouah.

Yes. And it was awesome. That was my second movie with him.

You started your career playing the role of a maid. You still play that role till date. That role today has been so elevated that every actress wants to play it. Before, not many actors wanted to play non-classy roles. What do you have to say about this?
In the end, it is about how important the character is in a movie. A maid can be the lead role. Most of my maid roles sometimes are lead roles or major characters. For me, I don’t think the number of scenes a role has counts, it is about how you deliver it. You can make a scene so memorable that it is etched in the minds of people. So, it is about impact, not number of scenes. I see every role as an opportunity to make impact.

You have been recognised with a number of awards, how did you feel about them?

I felt great. Of course, it feels nice to be appreciated for doing something well. It makes you to want to do better. I appreciate all those who supported me and who made the awards possible.

If your kids show any interest in acting, would you encourage them?

What if they decide to act?

No. they wouldn’t decide to act. It is not about us deciding what they will do, but these ones are not going to act. [Calls out her children] Henry you will be a doctor! [Henry nods] You see? [Laughter]

What are the odds of being an actor?

The only thing I might say is that being famous takes a lot of your personality. It also takes away your privacy. Being famous is not good because you get to be judged on every move. Outside those, it is actually nice being an actor.

You are a born-again. Does your faith influence role interpretation?

Yes, I am a born-again Christian. I wouldn’t say it influences my role because as a Christian you are a bridge maker. People should look at you and tell the difference. In filming, I don’t like to embarrass myself, I don’t like to embarrass my husband. And if you look at the Christian life it is about knowing what is right and doing it. So, my life in and outside the movie is about impact. It is not about choosing a role you would or wouldn’t play, it is about impact.

How is your relationship with Tonto Dikeh?

She’s my girl. She is like a sister to me. We outgrow things. We both have kids and are raising them.

Do you have mentors in the movie industry?
I used to have mentors, but for some time now it has been my husband. He has the best things to say about everything. I am always awed by the way he reasons. He has certain perception of life that intrigues me. For like four years now, he has been my mentor. He makes me see things right. And we all need a person who makes us see the best in everything. So, yea, my husband is my mentor.

Starting out, what drew him to you?