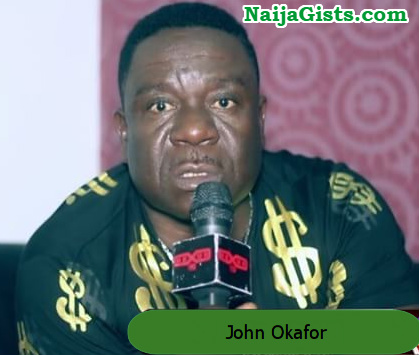 The comic actor has narrated how he almost jumped into a well to commit suicide several years ago when the man he was living with at Ajao Estate area of Oshodi, Lagos threw him out of his house with his loads.

Mr. Ibu said he was frustrated and decided to end his life, but that the lyrics from the music of legendary Michael Bolton, titled: “When I am back on my feet again,” saved him from jumping into the well.

Mr. Ibu, who was a guest on Brilla FM with Murphy Ijemba, said his friend whom he was staying with at Ajao Estate suddenly decided to throw him out of his house, saying that he had already opened a well to jump inside when he heard the song from Michael Bolton being played from a neighbour’s house.

“I went back from where I was standing before and the guy who was living in the next building, he was playing Michael Bolton and the title of the song was “when I am back on my feet again.” I listened to it. I covered the well back, I went back closer and the man singing was talking to me straight. After I listened to that music, I said God would have hated me if I had killed myself. God would have driven me away from his kingdom. I would have been in hell,” he disclosed.

Mr. Ibu said due to what happened to him in the past, he could not watch anybody shedding tears before him, saying that “I go the extra mile to help them, I don’t have to know you, I have taken people out of this country who are not my relatives, I just met them on the streets. I don’t have to know you, the issue is that I just reflected what happened to me years back, I made up my mind that assisting people will be a key thing in my life.”

Mr. Ibu narrated further: “After the music finished playing, I discovered my new self and I said, well, the guy threw out my bags and clothes on the floor, I left them there. I was still wearing what I wore that day. I left the compound and I was looking for a place like uncompleted building or abandoned vehicle so that I can clean it up to sleep.

“I saw a trailer parked and I decided to sleep there, all of a sudden, in that trailer, I saw the marks of dogs and I decided not to sleep there anymore for fear of the dogs. I worked into the street and I saw some crowd gathered at Ajao Estate, I met some colleagues, I was given a script to read but because I had not eaten anything and my sight was bad, I could not read it.

“There is name I always prayed for; she told me to come and stay in her house, she was just a fan, she wanted me to follow her to her boy friend’s house; I followed her since I don’t have a place to sleep. When we got there, the boyfriend travelled. We got to a street called Adetola Aguda, I remembered the number I was given sometimes ago, it was 125 and I searched for it.

“Coincidentally, that my friend came back from Germany the day before. He told me that wherever I live in Lagos I must park out today. The guy took me to my house and saw my bags and loads outside, I first lied to him that I wanted to travel, which was why I brought out the load. I carried my bag and clothes and we went back to his house and he gave me a room; I went in and started crying again. I reserve my biggest thanks to that girl, one Sandra Eze, God will pick you up and collect your case file. Everything must be yours,” he narrated.