★ Advertise and Sell your Products, Merchandise, Music, Videos & Get promoted by the ★STAR★ Call to Place your advert on this Channel★
Omotola The Interview: About Relationship, Work and Life Emotional note reveals Tupac split from Madonna ‘because she was WHITE’ as letter penned from late rapper’s prison cell goes under auction for $100,000

Actress Joke Silva and her actor hubby, Olu Jacobs are celebrating their 30th wedding anniversary today November 16th. They got married in 1985. Joke shared the photo of herself, her husband and their two sons and wrote 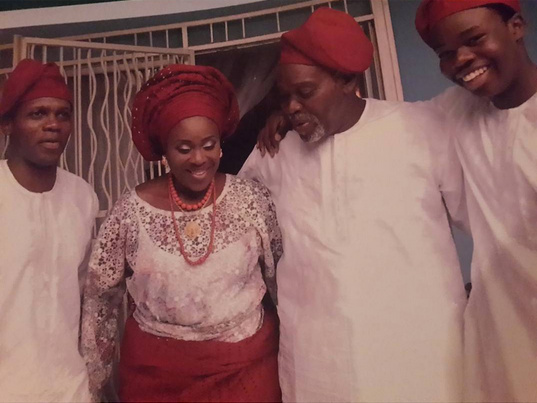 I was having a meeting at the National Theatre and the door opened a young lady came in. I looked at her. I have never met her before in my life and I said to the people in the room ‘ladies and gentlemen, this is the lady I am going to marry’. Everybody laughed. She looked at me up and down, hissed and left. Today, she is my wife and that was 27 years ago.
“And it has loaded. 30 years ago on 16th November 1985 we said “I Do”. It is a day of thanks To our Heavenly Father for all those who made those 30 years doable..my late mum and dad. Chief Afolabi Silva and Dr (Mrs) Abimbola Silva. They both tried to be fair…but mum was most times in Olus corner and Dad leant towards mine.
My late sisters in law mama Shomolu and mummy Ibadan. ..my late brothers in law Papa London and Papa Fermi. ..all of them so protective of me��God in his wisdom has called you home. Your blessing will not decrease. We miss you all. My sisters Bisi Silva and Toyin Olawoye…nudging us to get married those many years ago…Sister Buki& Uncle Laolu Akintobi ..Bunmi Tejumola Faith Eboigbe my warriors…�������� Chisom Ezoke daughter sister friend… Sinmi Adesanya supporters no matter what������…Moji Olagbegi pastor in the house ����Bunmi and Soji Oyinsan besto of life you never held your punches from either of us and made sure we made it work..������..Lola Fani-Kayode there from the beginning…taking me by the scruff of the neck and shaking me until I found my way back to my Lord Jesus..����..Thank you. Our Son’s Olusoji and Olugbenga our Jewels God bless you. May you both find bone of your bones�� and in the words of my favourite hymn at the moment “Oh God beyond all Praising…”We thank you for these 30 years. May only death do us part and may our love in all its ramifications wax stronger. Thank you all for the good wishes and prayers. God bless you. ����������”

Read the abstract of the interview Olu Jacobs granted on their union about a year ago on his 71st birthday below:

The Secret of Long-Lasting Marriage

It is God. There are other forces outside that you need to take cognizance of but when you do, you have to make sure that they don’t take control over your life. You are now thinking for two. No decision you take should be for yourself alone. It’s for two and it must remain for two. You have to always remember that. If my wife goes out, and she finds out that she would not be able to make it back at the time she initially thought she would, she picks up the phone and calls me to tell me. Fine! You are thinking for two, she knows where I am, I know where she is. We still do this till tomorrow. Communicating like that helps a lot, once we are talking, you have an idea of where I am and I have an idea of where you are. I am not saying that it should be every minute calls. Sometimes just being together in a room not necessarily saying anything is also important. 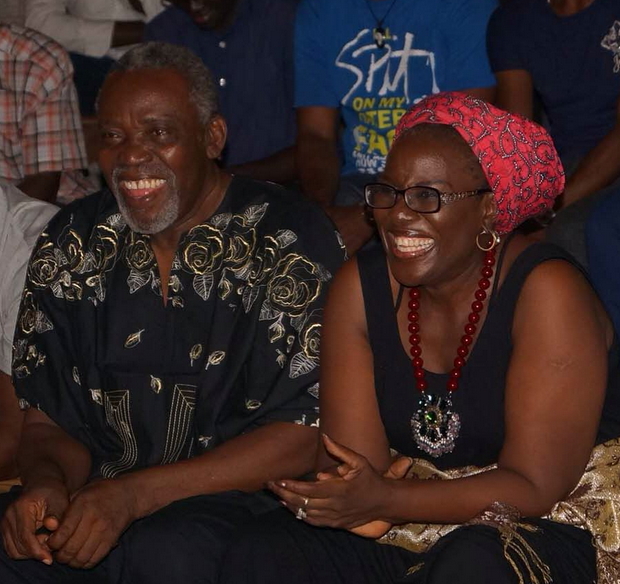 The Art of Resolving Quarrels

You learn not to pick on anything your partner says. It interferes with the relationship. If something happens and you want to discuss it, discuss it till the two of you resolve it. Why won’t we argue? I have a mind, she has a mind so why shouldn’t we argue. We must argue but as we do so, we must finish up that argument so we can start another one. We must quarrel, it is resolving it that is the task. Anybody can fight but how many can sit down and resolve it? You must finish one fight before another and you cannot jump because if you jump it will pull you back. We thank God and pray to him to continue to guide us and give us the wisdom to relate properly, and to be as fair and honest as possible. Apart from that, we just take it as it comes.

About Wife Maintaining Her Maiden Name.

She is her own individual. When I met her, she was an actress known as Joke Silvaso why should marrying me now deny her and her audience her name. She is Miss Joke Silva who is Mrs. Joke Jacobs. It is as simple as that. People now begin to say what they like. They have even written that we are separated and all sort of stuffs. When she is working, she is Joke Silva but she is Mrs. Joke Jacobs at home.

The Things Olu Jacobs Likes / Dislikes About Her Wife

Sometimes, she insists on things. Even when we have resolved it, she will still bring it back. She thinks more of others. She will think of you and remind you of things that need to be reminded of. She is always happy to help anybody. For her it’s not an effort. She cares a lot and of course, we are all boys in the house so she mothers all of us. That’s the way, we handle it, so whatever we need to do, we discuss it. Veteran actress Joke Silva shared a photo of herself and her husband Olu Jacobs from the 1980s on Instagram
She captioned…
Joseph.. I was Mary….A pantomime…part musical part drama at the National Theatre Lagos….simpler times…no one could imagine a 9/11 and all the terrorism that has erupted all over the world on a constant basis…Beirut. ..Paris…Northern Nigeria sooo many grieving…an eye for an eye makes the whole world blind….We pray for our leaders Lord…wisdom Lord…30th W.A. still loading 🙏 a safe Sunday all.🙏