★ Advertise and Sell your Products, Merchandise, Music, Videos & Get promoted by the ★STAR★ Call to Place your advert on this Channel★
“A lot of people say Tonto Dike should be scared of me” – Shirley Igwe Belinda Effah – A Rising Star

Although, she has had her challenging moments in the industry, Belinda Effah is one of the fast rising actresses in Nollywood  whose name rings a bell in the industry. She has achieved a lot in a very short while, winning   laurels and writing her name in gold as far as the world of make-believe is concerned. In this interview, she tells Showtime Celebrity what it takes to be where she’s today and why she cannot date anybody in the industry.

How has the journey been so far?

The journey so far has been wonderful. There was a time when Belinda Effah was a struggling actress, just hoping to feature in a movie. But today, the story has changed. Thanks to Royal Arts Academy owned by Emem Isong and her sister, Uduak Isong Oguamanam who featured me in their movies, “Udeme mmi” and “Kokomma.” Featuring in these movies opened a lot of doors for me. I have won a lot of awards. I’m actually on my own, and I now reject scripts . I’m not saying that I’m there yet, I’m still hoping to get better. But things are actually different today.

Was it part of the challenges you faced before hitting the limelight?

Then I was not matured as an actress, physically , emotionally and mentally. That was my build up process, the producers then knew what they wanted. They didn’t tell me I was a bad actress. They said, I had what it takes to be a good actor. But looking at me today, things are different. I have added some weights in the right places. I guess I fit into certain roles now than before.  May be, they didn’t see me fitting into a particular role . Like I said earlier, I wasn’t just matured then.

How were you able to get the role that gave you the break?

That was after I featured in Emem Isong’s “Udeme mmi.”  Her sister invited me to be part of the cast of her film, ‘Kokomma” . I read the script and I liked it because it was a very touching story. To me, every script that comes my way, gives me an opportunity to do something differently.

How many movies have you done till date?

I have done a couple of movies. I don’t keep count of the movies I have featured in. But I’m happy that I’m busy every other day. I’m one actress that like to take a break to refresh myself after I have done one or two movies, so that I can give my very best into a production. I’m always busy, I have won several awards and I’m hoping that the endorsement will start coming my way.

You seem to be eyeing endorsement by some  multi-national companies?

Yes, that’s the glory of every actress that you are doing great works and people want to associate with you.

When you are on set , what’s the experience like?

I have different experiences especially when I’m working with different producers. Usually, I get fair treatment. As an actress, I have to bring my game to the table. The industry is such that we have new faces that are strong as well. To me, it is not about featuring in a movie that matters, rather it’s about making an impression on the people.

Belinda Effah was formerly described as a regional actress. At what point did you come out of that circle?

As an up and coming actor, when you are offered a role to play in a movie, you don’t really care what you are being offered. You just want to be on set. Some people will want to describe me as a regional actress. But back then it’s not as if I haven’t done a couple of English movies . After all, I started with English movies before I later featured in the two movies  that brought me to the limelight.

Maybe, it could be because the producers of these films distributed them far and wide causing people to get to notice me. But the producers of my early movies did not distribute the films well and that’s why people tend to see me as a regional actor. So, it doesn’t make me a regional actor. I’d feature in both English and indigenous  movies. If  I can speak the language, give me a script and I will interprete it to the best of my knowledge.

How did you feel when you were announced  winner of the Best rising actress in Africa at this year’s AMAA?

That I was nominated for the award was a win for me. I kept an open mindset that if I win the award it’s  an additional advantage to me. I was very tensed because I checked out the profiles of everybody that was nominated in that Best Promising Actress category.  Prior to my nomination, I have won GIAMA  Awards, and I have also gotten a lot of recognition awards. It was like ‘let the trend keep flowing.’  I was overwhelmed when I was announced the winner. I’m grateful to Royal Arts Academy because they didn’t know me from anywhere. They saw something in me which they tried their best to harness it.

Between last year and this year, you have been on top of your game. What’s the secret?

I came into Nollywood at the right time. I joined the industry between 2005 and 2006. Then I don’t think the industry was ready for me. I was part of the Next Movie Star reality TV show and I was one of the last Housemates standing. I thought participating in that show  would create a new opening for me. But it never did. For four years ,I couldn’t lay my hand on anything tangible.

At a point, I had to take up a paid job because I needed the money to fend for myself between 2006 and 2008. I came back in 2011 through the first series of “Tales of Eve.” It gave me a huge platform because a lot of people got to watch the series. That was when the industry actually called me back. A lot of people identified with the series, and since then, I have done a couple of movies.

The movie, Kokomma, got me nomination for the 2013 Africa Movie Academy Awards ( AMAA). After featuring in that movie, a lot of things started to fall in place because people started calling me for jobs. Like I said earlier, I joined Nollywood at the right time, and everything is working out fine for me.

What would you say prepared you for what you are doing today?

I have always wanted to act. I was part of a drama group in my church back then. When the opportunity presented itself, I took it with everything that I had. I could recall that I was still in school when  I came on holiday in Lagos. A modelling agent saw me and wanted to use me to brand  their product. Thereafter, I saw an advert on television where actors were invited to audition for the production, “Shallow Waters.” I bought the form and went for the audition. Later, I was given a minor role. My passion for acting increased, and each time, I was on holiday, I would storm Lagos to pursue my passion. So, immediately I graduated from the university, I relocated to Lagos.

What did you study in the university?

I studied Biotechnology  in the university. Initially, I wanted to study medicine, but when it was not forthcoming, I switched to Biotechnology . But at the back of my mind, it has always been the art.  I have always wanted to be an actress right from when I was younger. Then, I always wanted to do something with the choir department of my church. So, when the opportunity came, I just went for it.

What are you doing to stay on top of your game!

As an actor, the best thing you can do for yourself is to keep improving on your skill. There are people you look up to. For me, I have several mentors; Genevieve Nnaji, Majid Mitchel and Uche Jombo. I pick one or two things from them in terms of acting, packaging and business sense and try to make it Belinda. I don’t  copy anybody but if there is need for me to watch  a particular scene in a movie in order to perfect my act, I will do so.  Also, in terms of  business, one needs to know what these star actors are doing. That’s basically what’s keeping me going.

Have you played a love scene in a movie before now?

Each time, you are playing the love scene, what actually come to your mind? 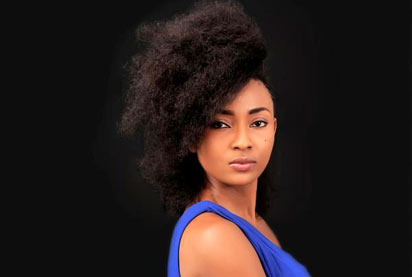 I am an actor and I have to be professional in my acting.

Some actors would tell you that while playing love scenes, their emotions usually come to play?

But mine never come to play because I become the character that I’m playing. I get involved in the character and when I’m through with the role, I return to myself again.

Have you been faced with a situation where you have to reject the person you are paired in a movie?

I hope to get to that stage where I would make a choice. But don’t think any Actor has the liberty yet to reject whoever he or she is paired up with. Otherwise you have to give your reasons for rejecting the actor; whether he or she is a bad actor or the person has a body odour. So far, I have not been paired up with someone I considered as a bad actor or one who has a body odour.

You must have faced some temptation while on set ?

Have you had such a  request before?

Of course,  we are all human beings. I am a good looking lady and  a role model to many ladies out there. I’m not acting because I want to act. I have a desire to affect people’s lives positively. Leadership is in service. I don’t want to mess up my reputation now because I am working on a project called “Belinda Advocacy Against  Rape.”I have a reputation to protect.  I have a lot of things in the offing. If  one is  tempted, one can easily go outside the industry to get herself a boy friend. I can’t afford to mess around in the industry.

Are you saying that you will not marry in the industry?

I didn’t say that. If I find somebody in the industry that I fall over heels in love with, why not.

How  often have you had heart breaks?

My heart have been broken and I have broken other people’s hearts. So, no hard feelings. It happens all the time where you like someone and he doesn’t like you. That does not mean there is no true love.

Have  you found true love?

You will get to find out very soon.

I like a God fearing man, and one who is down to earth.