By Emily Yahr May 10 at 1:57 AM Email the author
Comedian Michelle Wolf during an interview with “Late Night” host Seth Meyers on Wednesday, May 9. (Lloyd Bishop/NBC)

Think Michelle Wolf was fazed about the criticism over her performance at the White House correspondents’ dinner a couple weeks ago? Not so much.

On Wednesday night, the comedian stopped by NBC’s “Late Night With Seth Meyers” (where she used to work as a writer) to promote her new Netflix series — and joke about her much-dissected, extremely polarizing speech at the Washington event, which ginned up controversy with jabs at Sarah Huckabee Sanders, Kellyanne Conway and the Trump administration.

“Congratulations on an incredible job at the correspondents’ dinner,” Meyers said to kick things off. (After the dinner, Meyers defended Wolf and ridiculed the outrage.)

“Thank you, thank you. It went great, and every single person loved it,” Wolf assured him.

Of course, the jokes about Sanders (“She burns facts and then she uses that ash to create a perfect smoky eye”) especially hit a nerve with some people, and Wolf was well-aware of the backlash.

“Actually, Sarah Huckabee Sanders called me,” Wolf deadpanned. “And she was like, ‘I loved it so much. I got every joke.’ ”

“Really?” Meyers asked in faux-surprise. “Cause I was watching. There were a few that seemed like she maybe didn’t like or get.”

“Well you know, you give the best information you have at the time,” Wolf said, using one of Sanders’s recent phrases.

Meyers also brought up a fun fact from C-SPAN: In a mere three days, the YouTube video of her performance garnered 4.4 million views, the most ever for a correspondents’ dinner comedian — edging out Meyers’s own speech at the 2011 dinner, which has 4.3 million views. 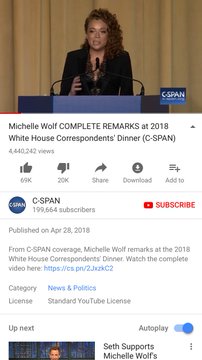 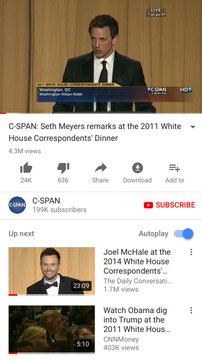 Soon, the two moved on to other subjects. Although when Meyers asked how preparation is going for her upcoming Netflix show, “The Break,” which premieres this month, Wolf brought it back around to the original topic.

“I would have to say,” Wolf said, “That if you hated the correspondents’ dinner, you’re really going to hate this show.”