The top model was discovered when he won the Elite Model Look Nigeria contest in 2016 and since then, have taken the modelling industry by storm since modelling for D&G and Kenzo to name but a few. The Inspiration for the renowned designers was Italian elegance, as they reinterpret iconic pieces from the male wardrobe.

The stunning collection itself included a series of black suits in brocade and strewn with sequins, prince of Wales checked trousers with pleats and big lapels worn with leather or graphic knit waist length jackets, colourful and smooth velvet suits with glittery collars, series of jumpers covered entirely in sequins. While a finale composed of tuxedos and suit trousers decorated with sequins, lamé and embroideries. 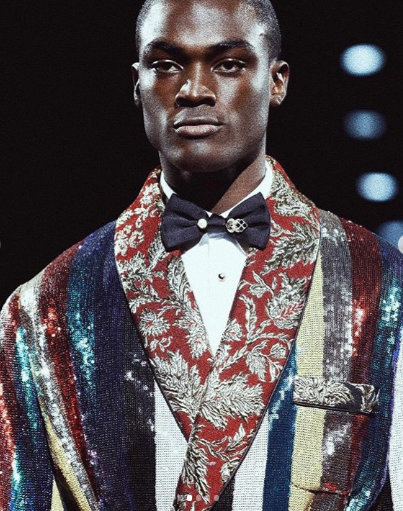 Nigerian born model and repeat Fashion Tiger, Davidson Obennebo was one of the models that strutted the runway at the Dolce & Gabbana F/W 19 Men’s Show.

He joined
fellow Nigerian, Victor Ndigwe who we saw walk the runway here.

Davidson however landed the honour of closing the show; he was the last model to walk the runway. This is a huge honour as established models are known to demand that they either open or close a show.

Besides, the designer usually saves what he considers his best piece for last.

This however is not his first time closing a show. He has both opened and closed Versace’s show in the past. 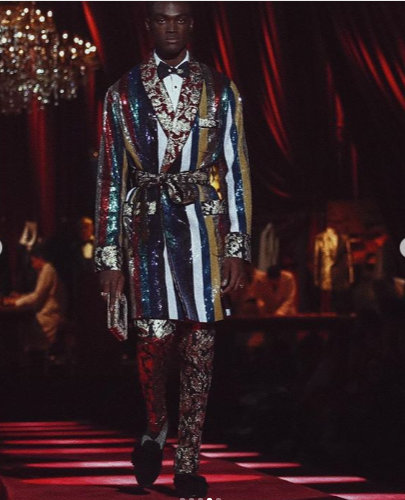 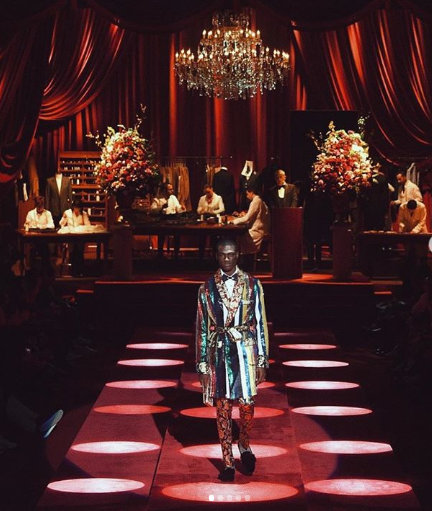 Davidson was discovered in Lagos Nigeria, in 2016 at the Elite Model look. He went at ahead to compete at the world stage where he won, making him the first person of colour to ever win the competition.

Beth Model Management Africa and Elite World supermodel Davidson Obennebo has taken his talents to the international sphere and has been gracing the runways of the Men’s fashion week shows around the world. From Moschino in Milan to Frankie Morello, Ermanno Scervino’s collection presentation, Dirk Bikkembergs, opening the Les Hommes show, Brooks Brothers at Pitti Uomo in Florence, and Frankie Morelle, this chiselled beauty has walked for their Fall/Winter 2018 presentations and killed it effortlessly. We will continue to update his catalogue as his castings arise, but while you wait, click through our gallery to see him in action.