Popular comedian, Bright Okpocha, aka Basketmouth, has been able to make a success of his comedy career so whenever he dishes out advice on how to succeed in the entertainment industry, the discerning would surely listen.

Sharing some ideas on what it takes to make it big in the industry, he said, “The key thing is originality. You always have to stay true to yourself because you cannot give what you don’t have. One mistake some entertainers make is that they try to copy the westerners, forgetting that you can never be better than them at their game. The best thing you can do is to sell things to them in your culture because that is new to them and they would want to know more about it. You can imagine a white man trying to speak Pidgin English, it wouldn’t flow so well and he would only end up being laughed at. That is why whenever I travel, I don’t try to be like them; rather, I remain myself. I stick to what I know how to do well and it has been working for me.”

Decrying the fact that Nigerians don’t always value what they have until an outsider packages it and sells it back to them, he said, “Fela is one of the most successful music icons out of Nigeria but we had to wait for the western world to pick Fela’s content and sell it back to us like it’s not ours. And that is also what we do with our natural resources.”

On how he discovered his talent, he Okpocha said, “Discovery of talent is mostly through hunger though I won’t say that’s what led me to find myself. I have always known my gift and I worked towards cultivating it. I used to play drums and I was even a DJ at some point. I was also a rapper and I enjoyed them all. But when I began doing comedy, I realised that it is what I really love.”

“Sometimes, young people come up to me and ask me to show them way but I find that funny because all they need is right in front of them. In our days, we didn’t have Instagram and other social media. If we wanted to be seen, we had to go out and perform at various far-flung places, but today, you can reach the world from the comfort of your bedroom, provided you have access to the Internet. I have realised that it is the billionaires that hustle the most. While the people that don’t have much are living like billionaires. As for me, I don’t want to be a business man, I want to be the business,” he said. 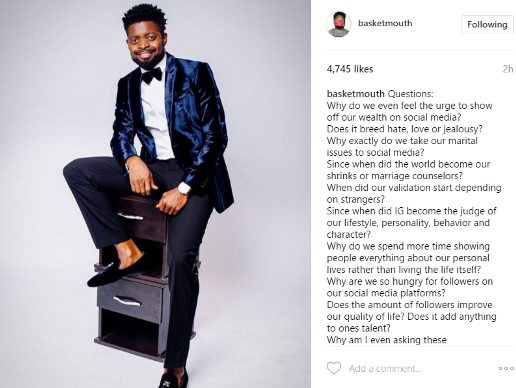 He wrote:
“Questions:
Why do we even feel the urge to show off our wealth on social media?
Does it breed hate, love or jealousy?
Why exactly do we take our marital issues to social media?
Since when did the world become our shrinks or marriage counselors?
When did our validation start depending on strangers?
Since when did IG become the judge of our lifestyle, personality, behavior and character?
Why do we spend more time showing people everything about our personal lives rather than living the life itself?
Why are we so hungry for followers on our social media platforms?
Does the amount of followers improve our quality of life? Does it add anything to ones talent?
Why am I even asking these questions….what’s my business sef?” (sic)

Could he be referring to Freeze, who he is not on speaking terms with?

OAP Freeze whose name Ifedayo Olarinde had on April 22, taken to social media to lampoon his estranged wife, who had also granted an interview to an online platform and revealed how he battered her just because he wanted to bring in another woman. Also citing Freeze’s loquacious nature as hereditary, the mother of two disclosed how her kids were in support of the interview granted because Freeze had crossed his boundaries.
In response to the interview, the OAP, who has become famous by his criticism of pastors and churches, also released a video and text of how he was placed on suicide watch while he was still married to Ope. Among other things said was the fact that his estranged wife should tell the world how her father died and what killed him.
source: KemiFilaniBlog
Facebook Comments
If you like this, please share!