One of Pete Edochie’s sons, Yul, has declared his intention to run for Governor of Anambra State later this year.

Yul, who is also an actor like his father, took to his Twitter page to reveal his ambition and upload his campaign poster. He, however, did not disclose the political party he intends to use as a platform.

He also stated that Anambra, “needs a new brand of leaders, who will put the masses first.”

He wrote, “My name is Yul Edochie. And I’m running for Governor of Anambra State. 2017 #TheLastbusStop

“We need a new brand of Leaders who will put the masses first, the older ones have failed us…They have come to the THE LAST BUS STOP!!!”

The elections have been scheduled for November 18. 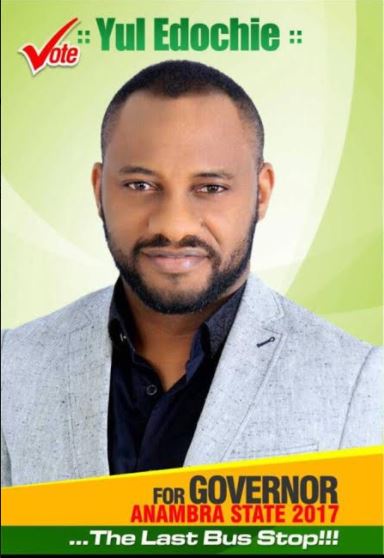 Nollywood actor and flagbearer of Democratic People’s Congress (DPC) in the forthcoming Anambra State 2017 gubernatorial election, Yul Edochie, has reacted to being left out of governorship debate organized by Channels TV for the candidates.

However, Yul Edochie, who is still optimistic about winning regardless of the debate, took to his Twitter handle to express his reactions.

“I wasn’t invited to the debate. But it’s nothing to worry about. We’ll keep the spirit high and keep campaigning.

“It’s time for the masses to have a say. November 18th, stand with me, the future is in our hands,” he tweeted.

It could be recalled that Yul Edochie was one of the last governorship candidates to unveil a running mate.