★ Advertise and Sell your Products, Merchandise, Music, Videos & Get promoted by the ★STAR★ Call to Place your advert on this Channel★
#BAAD2017: Why I married Banky W – Adesua #Throwback Thursday:How Sound Sultan, Yemi Alade, others celebrated Olisa Adibua’s 47th brithday…

Two cars manufactured by students of the University of Benin, UNIBEN, and their counterparts from the University of Lagos, UNILAG, have passed an international technical evaluation test in Rotterdam, Netherlands. 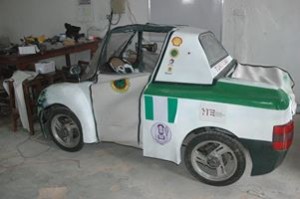 Tuke-Tuke, built by the UNIBEN students, was on Thursday given the technical pass to participate in the 2014 Shell Eco Marathon along with 200 other cars from 26 other countries, mostly in advanced economies.

The Media Manager, Shell Nigeria, Precious Okolobo, said on Friday that the car built by the UNILAG student team, named AUTONOV II, was also issued the technical certification to join in the marathon, which began on Thursday.

The cars, which are under the solar battery-electric category, are participating in the race in the prototype class.

“Shell Eco-marathon challenges student teams from around the world to design, build and test ultra-energy-efficient vehicles,” Mr. Okolobo said. “The winners would be teams that go the furthest using the least amount of energy.”

The event, according to organizers, sparked a debate about the future of mobility and the inspiration of young engineers around the world to push the boundaries of fuel efficiency.

All cars were expected to pass a strict technical inspection test to confirm that they were not only fit for that purpose, but also safe, before they were allowed to join the race.

“The two Nigerian universities (UNIBEN and UNILAG) participating in the 2014 edition of Shell Eco-marathon Europe are the first teams from Sub-Saharan (Africa) to enter the global event,” Mr. Okolobo said.

The Nigerian cars would join the race for ultra-energy efficiency cars on the road.

The technical inspection was to certify cars qualified to perform the actual race that would see students around the world competing to produce cars of the future – those with the capacity to race for thousands of Kilometers on one litre of fuel.

Both teams also joined a specially chosen group of ten teams at an opening ceremony of the programme at the Ahoy Centre, Rotterdam, Netherlands on Friday.

The Shell Petroleum Development Company of Nigeria, SPDC Limited, operator of the NNPC, Shell Joint Venture, is sponsoring Universities of Lagos and Benin to the event.

Since then, students from UNIBEN and UNILAG have worked to build the cars participating in the Rotterdam Marathon this week.

In line with the main objective of Shell Eco-marathon, to challenge students from around the world to design, build and race fuel-efficient vehicles, the judges would be looking to reward the cars that drive farthest with the least amount of fuel.

During a visit to the Nigerian teams on Thursday, the Chief Executive Officer of Royal Dutch Shell Plc, Ben Van Beurden, commended the Nigerian teams for their innovation and resilience, despite the challenges with technology in Africa.

He said the company would be willing to support the students realize their dreams.

“In my mind, Africa is the continent of the future. It has so much potential: human potential, resource potential. It has so much dynamism. It has so much growth today that I think this actually is going to be a very important milestone going forward. It is wonderful to have the Nigerian team here.”

“We have been doing this for over 30 years. It started in France and has gone all around the world. It is fantastic to see the scale that we have now. The energy, the enthusiasm and the innovation that has taken place, and the fact that we have a Nigerian team here participating is an incredibly milestone,” Mr. Beurden said.

Team Leader of the Nigerian National Petroleum Corporation, NNPC, Kolapo Jolayemi, said the corporation was proud to have co-sponsored the students, seeing the level of innovation that they have exhibited.

Mrs. Jolayemi was excited that Nigeria was not only coming for the competition for the first time, but that the country’s representatives passed the technical evaluation.

“I feel great and proud to be a Nigerian, and I am even impressed by courage and efforts out in by Nigeria,” she said.

The supervisor of the UNIBEN team, Akii Ibhadode, said it was great that the school was able to pass the technical inspection the first time it was participating in the competition.

“Many teams do come. But this is the first time that we are participating and we didn’t know that we will come this far with the 10 technical tests,” he said. “I want to commend the dogged spirit Nigerians have.”

“Somehow, we were fast tracked to come and compete in Europe 2014. We had very little time to do the second version. We had to settle for this first version. It gave us so many problems. But thank God we were able to overcome the problems, especially concerning weight. We hope to do much better in 2015. The finishing would be great,” Mr. Ibhadode said.

The Team Leader of the UNIBEN students, Adekoya Adeyemi, was overwhelmed on receiving the evaluation certificate from the international Assessors, particularly the day the team passed the weight test, describing the experience as a miracle.

“I feel so happy and excited to be here and to be part of the achievement. This is the first time that Nigeria is coming for the competition, and we have passed the technical evaluation. I feel great and proud to be a Nigerian, and I am even impressed by the courage and efforts out in by Nigeria,” Mr. Adeyemi said.