21 Things We Learned Hanging Out With Dwayne Johnson Tom Wolfe: The Life and Times of a Revolutionary Storyteller 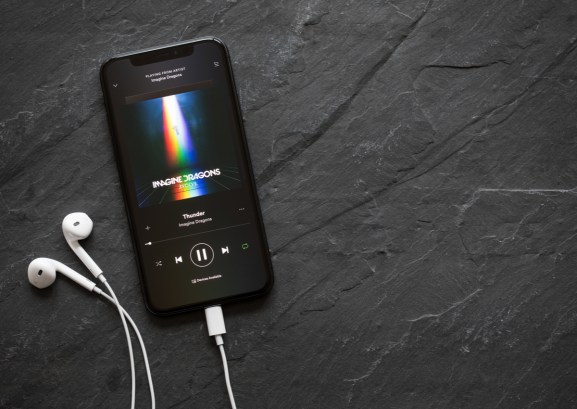 This week, Elon Musk weighed in on a much debated question: Are artists getting ripped off by big streaming services such as Spotify and Apple Music? He says yes. Musk’s opinions are kind of inherently interesting, but this one is especially intriguing since we know that — at least at one point — Tesla has considered creating its own music streaming service. I’m here to argue that he’s wrong on this question, though. As I’ll try to show, artists’ meager pay is not a result of them being “robbed” by streaming services. 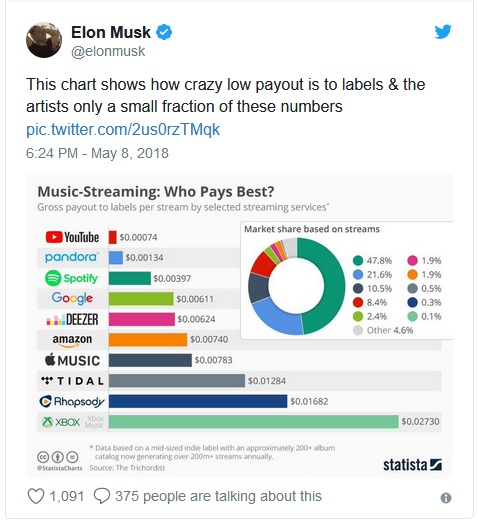 As an example, let’s look at Elon’s new girlfriend. Grimes. Grimes is a Canadian musician with an impressive following. Her song “Kill V. Maim” has generated 21.5 million streams on Spotify since its release in November 2015. As Musk points out, Grimes and her label only got $0.00397 each time her song was streamed (the label and the artist usually share 50-50). That’s $85,000 in total for a period of almost three years. Sure, that’s not a lot of money. But is Spotify to blame for it?

Spotify’s business model is actually kind of straightforward. They built a great distribution tool that helps artists reach their audience. For this service, Spotify charges about 30 percent of whatever money it is able to bring in. If Spotify was to charge 0 percent for its services, unreasonably sharing all of its revenue among the artists on the platform, Grimes and her label would then get $0.00567 per stream. That’s a nice pay raise, for sure, but it’s easy to see it still doesn’t even come close to an artist’s expectations.

So, if Spotify isn’t “robbing” Grimes, who is? Well, perhaps no one is. There just isn’t that much money to begin with. As it currently stands, people are unwilling to pay more than $10/month to access, basically, all of recorded music. If Spotify raises its price further (and it is experimenting with it), listeners might simply resort to pirated music, which Grimes does not get paid for. This is a business reality, not corporate greed. As such, Grimes’ payday could not be easily raised by Tesla’s hypothetical music streaming service.

Musk’s tweet is not only unfair to Spotify and other streaming services, it also distracts us from the root problem. If, as I argue, the problem is with the size of the pie and not the with way it is shared, then the solution should focus on generating more income for the entire industry. The good news is that this seems to already be happening. Digital Music is growing at an impressive rate of 18.3 percent CAGR and is expected to double by 2021. As more and more people pay for a music streaming subscription, the market grows, and so does Grimes’ share of it.

Sefi Keller is a product manager at Revelator.