No secret about that. Everybody knows it.

Even tougher than dating?

The minefield known as online dating. It’s a recipe for disaster and worse.

You’re putting yourself out there.

And “out there” happens to also be where thousands, millions, billions of crazy people are putting themselves as well.

Tinder is among the worst offenders.

For some reason, it just seems to bring out the worst/craziest/dorkiest in all of us. Yes, even you.

But maybe it’s good to be a little wild.

Just don’t go out of control, like the woman of our story did. Read on to find out what happened.

But I’m gonna tell you right now, this gets out of hand real fast.

In case you need more proof that Tinder can be full of insane weirdos, look no further than this woman — don’t let the “Happy Saturday” fool you. 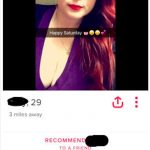 All was going well for about .2 seconds, but once her paper-thin confidence is shaken, she unleashes an insane and offensive rant that could only come from a crazy person.

Warning: There is adult language, if that adult is insane. 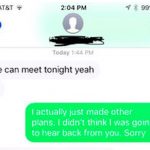 He replied, “I actually just made other plans. I didn’t think I was going to hear back from you. Sorry.”

In reality, this young man just made the biggest mistake of his life. At least as far as breaking tentative plans on Tinder is concerned.

She didn’t take it well. 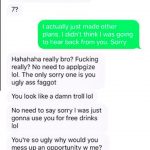 Saying she didn’t take it well is actually putting it mildly.

And no, she wasn’t done there.

She was far from done. She was just getting prepared for battle, as it turns out. 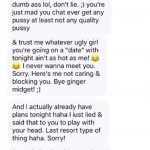 Just when you think she was done, she goes for one more offensive jab, this time from a different phone number. 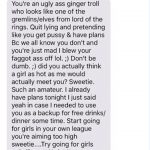 Given that dude’s text count went up to sixteen unread messages during this time, it looks like he’s got better, more sane options.

Thank goodness he dodged that bullet