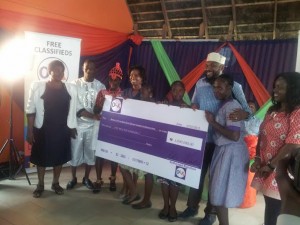 It’s always touching to see celebrities giving back to the community whenever they get the chance to.

Popular OAP, Steve Onu aka Yaw, sold his car to donate to Down Syndrome Foundation and Bethesda Home for the blind in Lagos.

The multiple award winning radio presenter on 95.1 Wazobia FM sold his car in the ‘OLX Gives Back’ campaign in a bid to raise money for the less privileged, whom he claimed to always celebrate his birthday with.

The proceeds from the sale of the car, about N500, 000, was doubled by OLX and presented to the representatives of the less privileged who were very appreciative of the gesture.

On why he sold his car for such a project, the funny actor disclosed that, “I was told about the campaign to help the less privileged and I actually thought of something tangible that I could sell to make reasonable money.

“If I had put up my phone or some other gadgets, I probably would not have raised such an amount. So I sold my car and donated it to the homes. This is something that brings happiness to me and I am always happy to associate with the less privileged.

“I celebrate my birthday with them every year and that is just to show you how attached I am to these people who have almost nobody to care apart from their tutors and guardians.
“I am also grateful to OLX for giving me this opportunity to help out in my own little way. I will always be glad to help when the need arises”.

Yaw, one of the actors of the popular ‘FlatMate’ TV series also encouraged colleagues to follow his footsteps as he believes that it does not cost much to have fun with the orphans or visually impaired children.

“I told a friend of mine that celebrating one’s birthday with these kinds will not cost as much as organizing a party to host people who are already established and are well-to-do in the society.

“I am not against that, but I believe that these kids also deserve to be showed some love on days when we are happy. The fact that it is quite cheap also makes it easier for me,” he explained.

Yaw’s generosity follows in the footsteps of other celebrities who have used specials days to celebrate with the less privileged by donating to them rather than having celebrations.